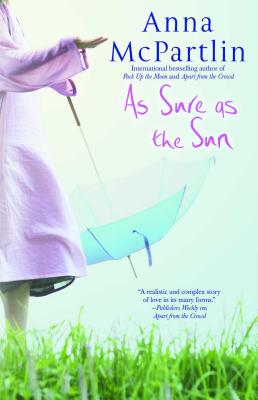 As Sure As the Sun

When bride-to-be Harri Ryan ends up at the ER with a panic attack on her wedding day, her twin brother, George, jokes that she's the most glamorous patient there. But this is no joke. It's Harri's second try at the wedding, and when she returns to her Dublin apartment, her fiancé, James, has already packed his belongings. Harri doesn't want to lose him, but she doesn't know how to convince James it won't happen a third time.

George, who knows Harri better than anyone, has a hunch there's more to the story than cold feet. He confronts their parents, who are acting strangely -- as if they're hiding a secret. And the truth they reluctantly reveal devastates both twins. Now, not only has Harri lost James, but George's relationship with his partner, Aidan, begins to fall apart, and both twins have to fight to hold on to those they love -- and to themselves. As the world they thought they knew crumbles around them, can Harri and George find a way to pick up the pieces before it's too late?

In her newest novel, talented young Irish writer Anna McPartlin paints a rich, multi-textured picture of ordinary people swept up in a scandal they never could have imagined. As Sure as the Sun manages to tickle your funny bone, tug at your heartstrings, and remind you never to give up on love.

Anna McPartlin, who was shortlisted for Newcomer of the Year in the 2007 Irish Book Awards, was formerly a stand-up comedian and a cabaret performer. She lives in Dublin with her husband, Donal.
Loading...
or support indie stores by buying on