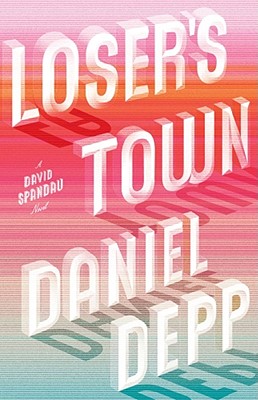 In Hollywood, you're not made until you've made a movie.

First-time author Daniel Depp introduces private investigator David Spandau, an ex-stuntman familiar with the ins and outs of Hollywood -- a smart, tough, and wickedly funny observer of la vie L.A. -- whose patience is almost sapped when he's hired to protect actor Bobby Dye from a blackmailing scheme gone wrong. Dye -- young, brash, and on the verge of becoming a major star -- has been set up by gangster Richie Stella, a nightclub owner and drug dealer with dreams of becoming a Hollywood producer. And he has a movie perfect for Bobby; problem is, it's the worst script anyone's ever read. But Richie is not easy to say no to, and when he retaliates, the game gets a little more deadly for more than a few of its players.

A Hollywood insider himself, Depp is no stranger to the temptations and illusions of the City of Angels and its ambitious, cutthroat denizens. Loser's Town is charged with the elements of all great L.A. noir -- crackling dialogue, fast-paced plot, and seedy, jaded characters -- and Depp brings a few new tricks to the genre with sadistic talent agents, washed-up actors looking for their second coming, and small-time hustlers just trying to make a modest living outside the limelight. Loser's Town is a deftly written thriller -- a gruesomely hilarious, occasionally wistful depiction of what goes on beneath those white letters on the mountainside.