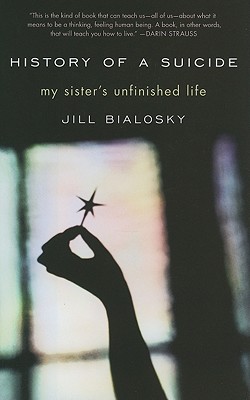 History of a Suicide

On the night of April 15, 1990, Jill Bialosky’s twenty-one-year-old sister Kim came home from a bar in downtown Cleveland. She argued with her boyfriend on the phone. Then she took her mother’s car keys, went into the garage, closed the garage door. She climbed into the car, turned on the ignition, and fell asleep. Her body was found the next morning by the neighborhood boy her mother hired to cut the grass.

Those are the simple facts, but the act of suicide is anything but simple. For twenty years, Bialosky has lived with the grief, guilt, questions, and confusion unleashed by Kim’s suicide. Now, in a remarkable work of literary nonfiction, she re-creates with unsparing honesty her sister’s inner life, the events and emotions that led her to take her life on this particular night. In doing so, she opens a window on the nature of suicide itself, our own reactions and responses to it—especially the impact a suicide has on those who remain behind.

Combining Kim’s diaries with family history and memoir, drawing on the works of doctors and psychologists as well as writers from Melville and Dickinson to Sylvia Plath and Wallace Stevens, Bialosky gives us a stunning exploration of human fragility and strength. She juxtaposes the story of Kim’s death with the challenges of becoming a mother and her own exuberant experience of raising a son. This is a book that explores all aspects of our familial relationships—between mothers and sons, fathers and daughters—but particularly the tender and enduring bonds between sisters.

History of a Suicide brings a crucial and all too rarely discussed subject out of the shadows, and in doing so gives readers the courage to face their own losses, no matter what those may be. This searing and compassionate work reminds us of the preciousness of life and of the ways in which those we love are inextricably bound to us.

Praise For History of a Suicide: My Sister's Unfinished Life…

"A tender, absorbing, and deeply moving memoir...[Bialosky] writes so gracefully and bravely that what you're left with in the end is an overwhelming sense of love."
—Entertainment Weekly

“Extraordinarily useful...a source of solace and understanding…. [Bialosky’s] hand is always skillful, as attentive to the rhythms of storytelling as to conveying emotion.”
—Time

"An extraordinarily valiant and resonant testimony to the healing powers of truth and empathy.”
—Booklist

“In quietly piercing language, [Bialosky] delivers a sure sense of a 'beautiful girl' who took her own life at age 21 and of what it means to grieve such a death, burdened with an awful sense of responsibility that can’t easily be shared with others.”
—Library Journal

“This is the kind of book that can teach us—all of us—about what it means to be a thinking, feeling human being. A book, in other words, that will teach you how to live.”
—Darin Strauss, author of Half a Life

“That rare book that is so articulate and stunningly close to the bone that one holds one’s breath while reading it. . . . Written with a poet’s eye and a novelist’s gift, History of a Suicide is remarkable for its author’s bravery, candor and ability to tolerate the intolerable.”
—A.M. Homes, author of This Book Will Save Your Life

“Jill Bialosky has written an extraordinary book, which brings her sister Kim to life and also serves as a practical road map to understanding why life can become unbearable for someone who seems extravagantly gifted. Readers will find solace and clarity in this wonderful book.”
—Susan Cheever, author of Home Before Dark

“Beautiful and incredibly brave. . . . Jill Bialosky has stared straight into the white hot heart of something very-nearly unspeakable and in doing so, has illuminated it—both for herself, and for ourselves. I can’t tell you how many times I caught my breath, how many times I cried.”
—Dani Shapiro, author of Devotion

“Jill Bialosky is such a fearless and clear-eyed and compassionate writer that although we know from the start how the story she tells will turn out, we cannot stop reading. By bringing her sister so vividly to life on these pages, she performs a great service. As much as anything else I've read, this book dispels the comforting and pernicious myth by which we keep the subject at a distance: that suicide happens only in other people’s families.”
—George Howe Colt, author of November of the Soul

“Like a match in the darkness, Jill Bialosky’s stirring memoir sheds light on a fathomless mystery. This intimate, brave book is a testament to the redeeming power of love, memory, and art.”
—Melanie Thernstrom, author of The Pain Chronicles

“Could things have been different? That is the inevitable, haunting question after a suicide. It can never be answered, only explored; and Jill Bialosky explores it with intelligence, integrity, a poet’s sensitivity, and a sister’s enduring love.”
—Joan Wickersham, author of The Suicide Index

“Better than anything on the shelf on the subject today, this powerful, honest, deeply personal testimony opens a conversation that is long overdue and restores the loving remembrance of those dead by their own hand to the place it deserves among the living. It honors a darling sister’s struggle and her memory at the same time it bears witness to the odyssey of grief Bialosky and her family endured. This willingness to play in the deep end of the existential pool is so rare a gift: that Bialosky juxtaposes the chronicle of Kim’s death with the challenges of becoming a mother is the stuff of metaphor and narrative we more often find in poetry. It is brave, ambitious and entirely accomplished.”
—Thomas Lynch, National Book Award finalist and author of The Undertaking

“By turns a mystery story, a psychological profile, a memoir, a literary and social critique, Bialosky writes about despair with such elegance and perspicacity that the reader, paradoxically, is returned to hope, page after gleaming page.”
—Lauren Slater, author of Prozac Diary

Jill Bialosky is the author of four acclaimed collections of poetry. Her poems have appeared in The New Yorker, The New York Times, The Kenyon Review, and The Atlantic, among others. She is the author of three novels, most recently, The Prize, and a New York Times bestselling memoir History of a Suicide: My Sister’s Unfinished Life. Jill was honored by the Poetry Society of America for her distinguished contribution to the field of poetry in 2015. She is an editor at W. W. Norton & Company and lives in New York City.