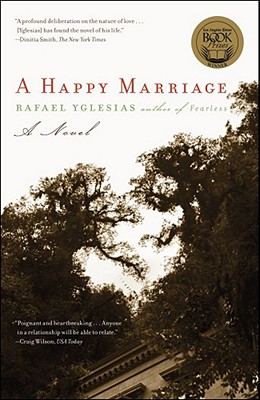 A Happy Marriage, Yglesias’s return to fiction after a thirteen-year hiatus, was inspired by his relationship with his wife, who died in 2004. Both intimate and expansive, it is a stunningly candid novel that alternates between the romantic misadventures of the first weeks of the courtship of Enrique Sabas and his wife Margaret and the final months of her life as she says good-bye to her family, friends, and children—and to Enrique. Spanning thirty years, this achingly honest story is about what it means for two people to spend a lifetime together—and what makes a happy marriage. “Anyone in a relationship will be able to relate,” said USA TODAY .

Told from the husband’s point of view, with revelatory and sometimes disarming candor, the novel charts the ebb and flow of marriage, illuminating both the mundane moments and the magic. Bold, elegiac, and emotionally suspenseful, Yglesias’s beautiful novel will break every reader’s heart—while encouraging all of us with its clear-eyed evocation of the enduring value of marital love.

Praise For A Happy Marriage: A Novel…

Rafael Yglesias is an American novelist and screenwriter, the son of writers Jose and Helen Yglesias. He dropped out of high school upon publication of his first novel, Hide Fox, And All After in 1972 at age seventeen. He is the author of nine novels, including A Happy Marriage, winner of the 2009 Los Angeles Times Fiction Prize, Dr. Neruda's Cure For Evil and Fearless, which he adapted for the screen, and The Wisdom of Perversity. He also wrote the screenplays for Death and the Maiden, Les Miserables, From Hell, and Dark Water. He has two sons: Matthew Yglesias, a Fellow at the Center For American Progress, public intellectual and author of Heads In The Sand; Nicholas Yglesias is a fantasy novelist who has recently completed Succession, the first of a three volume trilogy. Rafael lives in the city of his birth, New York.