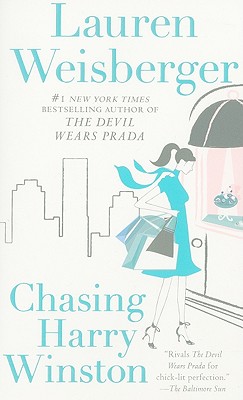 Meet Emmy, Leigh, and Adriana. Best friends since college, each has seen her share of career foils and romantic foibles over the past decade. Now, as they approach thirty, they’re looking toward their future...and they’re not quite sure they like what they see.

When they are each alone on Valentine’s Day, the trio makes a pact. Within one year, each woman will change the thing that most challenges her. For Emmy, it will be to find romance—or a fling—in every foreign country she visits. For Leigh, a book editor with a dream boyfriend and dream apartment, no change seems necessary—until she starts to notice a brilliant and brooding man named Jesse. And for commitment-phobic, drop-dead-gorgeous Adriana, her goal is to have an engagement ring and a house in Scarsdale. Each woman starts the year with the best of intentions—which is exactly why the pact goes immediately, and exceptionally, awry.

Lauren Weisberger is the New York Times bestselling author of When Life Gives You Lululemons, The Singles Game, and The Devil Wears Prada, which was published in forty languages and made into a major motion picture starring Meryl Streep and Anne Hathaway. It was announced in 2017 that musician Elton John and Paul Rudnick will adapt The Devil Wears Prada for the stage. Weisberger’s four other novels, Everyone Worth Knowing, Chasing Harry Winston, Last Night at Chateau Marmont, and Revenge Wears Prada, were all top-ten New York Times bestsellers. Her books have sold more than thirteen million copies worldwide. A graduate of Cornell University, she lives in Connecticut with her husband and two children. Visit LaurenWeisberger.com to learn more.
Loading...
or
Not Currently Available for Direct Purchase