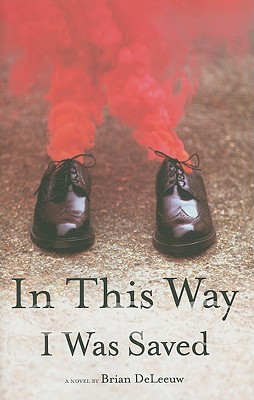 In This Way I Was Saved

“In This Way I Was Saved is a fantastic psychological suspense about a family's haunting madness written from an unexpected point of view.”
— Cathy Allard, BayShore Books LLC, Oconto, WI
View the List

From a powerful new voice in literary fiction comes an intense psychological thriller in the tradition of Donna Tartt, Stewart O’Nan, and Patrick McGrath, about a boy’s struggle with his inner demons.

• Exciting new literary talent: At just twenty-eight years old, Brian DeLeeuw has worked in publishing in both London and New York City, where he is an editor at the literary magazine Tin House. In This Way I Was Saved was acquired in a heated auction.

• Haunting subject: A dark, compelling story that skirts the edges of the supernatural, In This Way I Was Saved evokes the best in edgy psychological horror with overtones of eerie cerebral pyrotechnics. With its dense web of family secrets, its undercurrent of violence, and its brilliant evocation of a troubled young person’s point of view, it has earned comparisons to Donna Tartt.

• Compelling story: Set in the wealthy environs of New York City’s Central Park West, the story begins in 1994, when Luke Nightingale is six and his parents are finalizing their divorce. Luke’s fragile, volatile mother Claire is the last daughter of a crumbling blueblood family; her mother died by her own hand.

The novel is narrated by Luke’s cynical, cruelly perceptive, and sometimes dangerously violent alter ego Daniel—who could be Luke’s imaginary friend, or something else entirely, something implacable, murderous, and evil. A novel about mothers and sons, the dangers of the imagination, the precariousness of sanity, the terrors of childhood, and the temptations of power—In This Way I Was Saved is a stunning debut by a writer of limitless promise.


Praise For In This Way I Was Saved…

"Elegant, unsettling and wildly original, In This Way I Was Saved reads like a coming-of-age-story with the heart of a nasty thriller."

"In This Way I Was Saved gave me chills, not only for its dead-on depiction of the searing loneliness of a hermetically sealed mind, but because it is so thrillingly well-executed. A superb first novel."

-- Kate Christensen, author of Trouble and The Great Man

“A riveting exploration of the dark side of self. . . . Suspenseful and terrifying, this tale about one’s shadow self running rampant is highly recommended.”

"More than brothers, less than friends, linked for life: the relationship between Daniel and Luke is unique in the annals of literature, and will keep you guessing right until the book reaches its inevitable conclusion. I haven't been this entertained by a debut novel in years."

-- Dale Peck, author of What We Lost and Body Surfing

“DeLeeuw debuts with a strange tale seething with disturbing psychological overtones. . . . Hitchcock would have loved the premise.”

"Original, subversive, funny, twisted, and totally engrossing, In This Way I Was Saved is a mind-bending tour de force. I read the last page, flipped back to the beginning, and immediately started it again."

"In This Way I Was Saved is a frightening, gripping tale about a sadistic secret sharer, a shadow self who is ready to devour its host. This is one of the most fascinating and controlled first novels I've ever read -- a sustained performance that hypnotizes and terrifies the reader."

-- Edmund White, author of A Boy's Own Story

“A story of friendship and betrayal, violence, madness, lust and power that will keep you guessing until the very last page—and leave you gasping for air.”