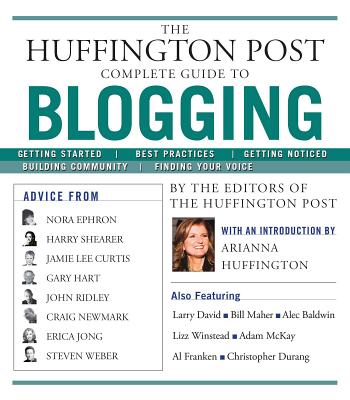 The editors of The Huffington Post -- the most linked-to blog on the web -- offer an A-Z guide to all things blog, with information for everyone from the tech-challenged newbie looking to get a handle on this new way of communicating to the experienced blogger looking to break through the clutter of the Internet. With an introduction by Arianna Huffington, the site's cofounder and editor in chief, this book is everything you want to know about blogging, but didn't know who to ask.

As entertaining as it is informative, The Huffington Post Complete Guide to Blogging will show you what to do to get your blog started. You'll find tools to help you build your blog, strategies to create your community, tips on finding your voice, and entertaining anecdotes from HuffPost bloggers that will make you wonder what took you so long to blog in the first place.

Praise For The Huffington Post Complete Guide to Blogging…

"...capture(s) all of the excitement of the blogosphere, enabling the would-be blogger to take a confident step online....A must read for blog newbies." -- Andrea Sachs, Time Magazine

Arianna Huffington is an author, syndicated columnist, and businesswoman. Named on Time Magazine’s list of 100 most influential people and Forbes Most Powerful Women, Huffington is a co-founder of The Huffington Post and the founder and CEO of Thrive Global.
Loading...
or support indie stores by buying on