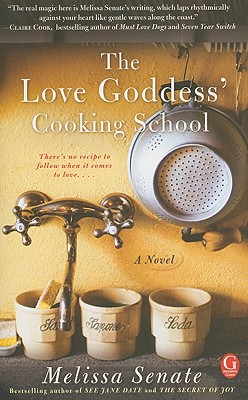 “I actually live on two different islands and really enjoyed the fictional life depicted on Blue Crab Island, Maine. Melissa Senate has captured the voices and unique community of 'Camilla's Cucinotta' with all of the quirks of family, love and friendship. I wish Holly Maguire was available to come on over with her grandmother's wisdom, her joy of cooking, and her recipes, which are included in this delightful book!”
— Kathleen Dixon, Islandtime Books & More, Washington Island, WI
View the List

From the bestselling author of See Jane Date and The Secret of Joy comes a charming, warm-hearted story about a woman's search for happiness after inheriting her grandmother's cooking school. When Holly Maguire inherits "Camilla's Cucinotta," her late grandmother's home-based Italian cooking school in Blue Crab Island, Maine, twelve of the sixteen students for the upcoming fall class drop out. After all, Holly isn't a seventy-five-year-old Milanese love goddess, whose secret sauces had aphrodisiac properties and whose kitchen table fortune-telling often came true. Holly, a broken-hearted thirty-year-old who's never found her niche, can barely cook at all. But she's determined to keep her beloved grandmother's legacy alive. Armed with Camilla's hand-scrawled recipe book, Holly welcomes her students: apprentice Mia, a twelve-year-old desperate to learn to cook Italian to stop her divorced father from marrying his ditzy girlfriend; Juliet, Holly's childhood friend grieving for her newborn--and the marriage she left behind on the mainland; Simon, struggling to be an every-other-weekend dad to his young son after his wife left him; and Tamara, a single thirty-something yearning for love. Mixing fervent wishes and bittersweet memories with simmering sauces and delectable Italian dishes, Holly and the students of The Love Goddess' Cooking School create their own recipes for happiness and become masters of their own fortunes.
or support indie stores by buying on
Copyright © 2020 American Booksellers Association