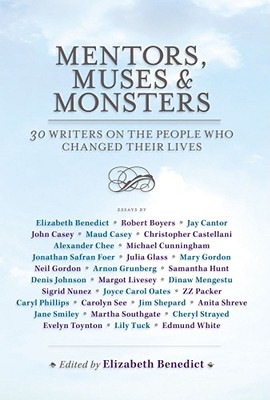 30 Writers on the People Who Changed Their Lives

For Denis Johnson, it was Leonard Gardner's cult favorite Fat City; for Jonathan Safran Foer, it was a brief encounter with Israeli poet Yehuda Amichai; Mary Gordon's mentors were two Barnard professors, writers Elizabeth Hardwick and Janice Thaddeus, whose lessons could not have been more different. In Mentors, Muses & Monsters, edited and with a contribution by Elizabeth Benedict, author of the National Book Award finalist Slow Dancing, thirty of today's brightest literary lights turn their attention to the question of mentorship and influence, exploring the people, events, and books that have transformed their lives. The result is an astonishing collection of stirring, insightful, and sometimes funny personal essays. In her communications with contributors, Benedict noticed a longing to thank the people who had changed their lives, and to acknowledge them the best way a storyteller can, by revealing the intricacies of their connection. These writers look back to when something powerful happened to them at an unpredictable age, a moment when a role model saw potential in them, or when they came to understand they possessed literary talent themselves. As most of these encounters occurred when the writers were young -- unsure of who they were or what they could accomplish -- several pieces radiate a poignant tenderness, and almost all of them express enduring gratitude. When Joyce Carol Oates describes her public-rivalry-turned-wary-professional-acquaintanceship with Donald Barthelme, we are privy to the fascinating sight of one of today's most important writers being directly, personally affected by another influential writer. When Sigrid Nunez reveals what it was like to be Susan Sontag's prot g , we get a glimpse into the private life and working philosophy of a formidable public intellectual. And when Jane Smiley describes her first year at the Iowa Writers' Workshop in 1974, she offers an intimate portrait of a literary milieu of enduring significance for American literature. Rich, thought-provoking, and often impassioned, these pieces illuminate not only the anxiety but the necessity of influence -- and also the treasures it yields. By revealing themselves as young men and women in search of direction and meaning, these artists explore the endlessly varied paths to creative awakening and literary acclaim.

Praise For Mentors, Muses & Monsters: 30 Writers on the People Who Changed Their Lives…

"Even when writing teacher Benedict is writing fiction, she's writing about writing.... So the subject of this irresistible anthology was a natural for her. People become writers by virtue of literary inspiration, be it a book, a place, or a mentor, so why not invite writers to write essays about their literary influences? The response was overwhelming and avid.... these exceptionally animated essays feel as though the writers couldn't get the words down quickly enough. And what an array of experiences and voices." -- Booklist

"A mesmerizing book of essays by famous pens who themselves were once helped -- or hurt -- by established talents as they tried to climb their way up the literary ladder. [Mentors, Muses & Monsters] beautifully captures the experience of being a literary aspirant -- wide-eyed, enchanted by words, and eager for the tutelage of a mentor -- one who's already scaled the temple wall and emerged, shining, in a turret." -- The Christian Science Monitor

"Every one of the essays here -- from Benedict's own remembrance of Elizabeth Hardwick to Christopher Castellani's "Coming of Age at Breadloaf" is wise and full of heart." -- Chicago Tribune

"Michael Cunningham relates his discovery of Mrs. Dalloway, the happy result of failing to impress a girl during high school.... Joyce Carol Oates tells us that she had no mentor but books.... And in terrific essays on the New York Review of Books and the Iowa Writers Workshop, Neil Gordon and Jane Smiley give us a sense...of how institutions conspire to turn ordinary human beings into award-winning authors." -- Bookforum (Robert P. Baird Nov. 5)

"Enthralling.... [a] lovingly compiled collection of essays." -- The Errant Aesthete

"This anthology is that rare gem, a collection whose whole is greater, even, than the sum of its parts. Where else could you read musings-about-muses, accompanied by juicy tales from deep inside the writing life, by 30 of the best minds of our generation, all between the covers of one book?" -- The San Francisco Chronicle

"The essays are not simply worshipful tributes to literary lions. Each writer shades in the nuances of character and experience that make his subject come to life, and each reads like a short story.... For the reader aspiring to sharpen his own craft, gem after gem emerges from this book's pages.... I haven't finished reading all the essays. In truth, I am reluctant to complete it, so deliciously rich and illuminating have I found each offering. I suspect any writer or serious reader will feel the same way." -- MV Times