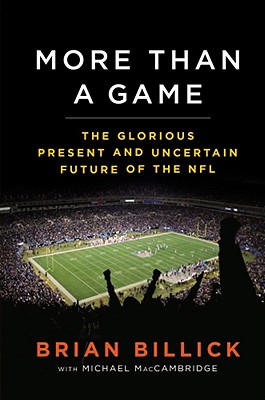 More than a Game

An inside look at how the battle off the field affects the competition on the field of america’s most popular sport—from one of the Nfl’s most successful and respected head coaches.

Fresh off the sidelines from a nine-year stint as one of the most successful leaders in pro football, Super Bowl–winning head coach Brian Billick has written a book about the sport he knows and loves, giving readers a fresh perspective on America’s Game. Combining his own experiences with a wealth of new interviews gained through his unsurpassed access to pro football’s most influential figures, Billick has written a vibrant, compelling account of the true state of the game today, and the dangers that it faces in the near future.

The National Football League stands as perhaps America’s last great mass entertainment, the rare enterprise that brings together a broad cross-section of our increasingly niche-driven marketplace. But even as the game has grown more popular, so has the financial pressure and stakes for all concerned.

In this taut, lucid breakdown of the game’s inner workings, Billick shows how dynasties are built and teams assembled, and he explains in detail how the economic pressures of the modern NFL can affect coaches and players alike. Billick welcomes fans into the locker rooms and the boardrooms for a revealing portrait of pro football and a penetrating look at the forces that will vie for control of America’s most popular game in the future.