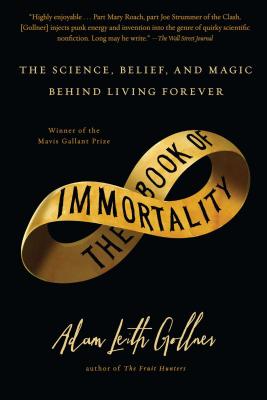 The Book of Immortality

A “wonderful” (Harper’s), “engrossing” (Parade) exploration of the most universal of human obsessions: immortality—from an author who is “part Mary Roach, part Joe Strummer of The Clash” (The Wall Street Journal).

What have we not done to live forever? Adam Leith Gollner, the critically acclaimed author of The Fruit Hunters, weaves together religion, science, and mythology in a gripping exploration of the most universal of human obsessions: immortality.

Raised without religion, Adam Leith Gollner was struck by mankind’s tireless efforts to cheat aging and death. In a narrative that pivots between profundity and hilarity, he brings us into the world of those whose lives are shaped by a belief in immortality. From a Jesuit priest on his deathbed to antiaging researchers at Harvard, Gollner— sorting truth from absurdity—canvasses religion and science for insight, along with an array of cults, myths, and fringe figures.

He journeys to David Copperfield’s archipelago in the Bahamas, where the magician claims to have found “a liquid that reverses genes.” He explores a cryonics facility, attends a costume party set in the year 2068 with a group of radical life-extensionists, and soaks in the transformative mineral waters at the Esalen Institute. Looking to history, Gollner visits St. Augustine, Florida, where Ponce de León is thought to have sought the Fountain of Youth.

Combining immersive reporting, rigorous research, and lyrical prose, Gollner charts the rise of longevity science from its alchemical beginnings to modern-day genetic interventions. He delves into the symbolic representation of eternal life and its connection to water. Interlaced throughout is a compelling meditation on the nature of belief, showing how every story we tell about immortality is a story about the meaning of death.

Praise For The Book of Immortality: The Science, Belief, and Magic Behind Living Forever…

"Adam Leith Gollner possesses a talent as rare and exotic as a coconut pearl…. Lustrous and exhilarating… The talents of a food writer, investigative journalist, poet, travel writer and humorist grafted onto one unusual specimen. Long may he thrive."
— Mary Roach

"A probing inquiry into the most insistent of human hopes."
— Booklist (starred review)

"An epic quest to understand the nature of immortality... An engrossing, immensely fascinating tour of beliefs."
— Publishers Weekly (starred review)

“Highly enjoyable…. Gollner is a good sport and a fine wordsmith. Part Mary Roach, part Joe Strummer of the Clash, he injects punk energy and invention into the genre of quirky scientific nonfiction. Long may he write.”
— Wall Street Journal

"[An] engrossing look at the way centuries of humans have sought the secret to eternal life through religion, magic, and science."
— Parade

"Sharp reporting and good-humor... Adam Gollner has done a terrific job of reminding us that, though we all have to die, it may not be the worst thing."
— NY1, "The Book Reader"

“Bold, entertaining, thought-provoking… The Book of Immortality is first-rate entertainment, a blast of intellectual stimulation and vivid reporting.”
— Shelf Awareness

Adam Leith Gollner has written for The New York Times, The Wall Street Journal, the Guardian, the Globe and Mail, and Lucky Peach. The former editor of Vice Magazine, his first book is The Fruit Hunters. He lives in Montreal.
Loading...
or support indie stores by buying on