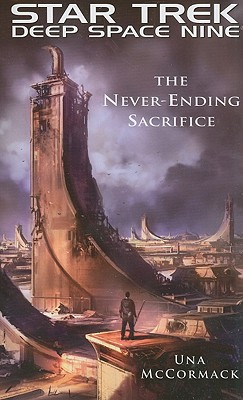 
Continuing the post-television Deep Space Nine saga, this original novel shows the fall of the Cardassian empire as seen through the eyes of a young man with a foot in two worlds.

Rugal is an orphaned Cardassian who has been raised by the people his race once conquered, the Bajorans. Reluctantly repatriated to Cardassia as a teenager, Rugal becomes the living witness to the downfall of the proud people to whom he was born, first by the invading Klingons, then during the Cardassians’ unholy pact with the Dominion—a partnership that culminated in a near-genocide. Through it all, Rugal’s singular perspective illuminates the choices that brought the Cardassians to their ruin...even as he learns that the Cardassian soul is not as easy to understand as he imagined.

Una McCormack is the author of ten previous Star Trek novels: The Lotus Flower (part of The Worlds of Star Trek: Deep Space Nine trilogy), Hollow Men, The Never-Ending Sacrifice, Brinkmanship, The Missing, the New York Times bestseller The Fall: The Crimson Shadow, Enigma Tales, Discovery: The Way to the Stars, the acclaimed USA Today bestseller Picard: The Last Best Hope, and Discovery: Wonderlands. She is also the author of five Doctor Who novels from BBC Books: The King’s Dragon, The Way Through the Woods, Royal Blood, Molten Heart, and All Flesh is Grass. She has written numerous short stories and audio dramas. She lives with her family in Cambridge, England.
Loading...
or
Not Currently Available for Direct Purchase