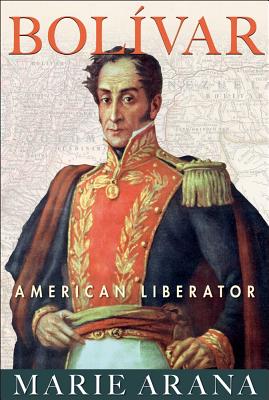 A sweeping narrative worthy of a Hollywood epic, this is the authoritative biography of the warrior-statesman who was the greatest figure in Latin American history.

It is astonishing that Simón Bolívar, the great Liberator of South America, is not better known in the United States. He freed six countries from Spanish rule, traveled more than 75,000 miles on horseback to do so, and became the greatest figure in Latin American history. His life is epic, heroic, straight out of Hollywood: he fought battle after battle in punishing terrain, forged uncertain coalitions of competing forces and races, lost his beautiful wife soon after they married and never remarried (although he did have a succession of mistresses, including one who held up the revolution and another who saved his life), and he died relatively young, uncertain whether his achievements would endure.

Drawing on a wealth of primary documents, novelist and journalist Marie Arana brilliantly captures early nineteenth-century South America and the explosive tensions that helped revolutionize Bolívar. In 1813 he launched a campaign for the independence of Colombia and Venezuela, commencing a dazzling career that would take him across the rugged terrain of South America, from Amazon jungles to the Andes mountains. From his battlefield victories to his ill-fated marriage and legendary love affairs, Bolívar emerges as a man of many facets: fearless general, brilliant strategist, consummate diplomat, passionate abolitionist, gifted writer, and flawed politician. A major work of history, Bolívar colorfully portrays a dramatic life even as it explains the rivalries and complications that bedeviled Bolívar’s tragic last days. It is also a stirring declaration of what it means to be a South American.

Marie Arana was born in Lima, Peru. She is the author of the memoir American Chica, a finalist for the National Book Award; two novels, Cellophane and Lima Nights; and The Writing Life, a collection from her well-known column for The Washington Post. She lives in Washington, DC, and Lima, Peru.

“Finally, Bolivar gets the sweeping biography he deserves. He was the greatest leader in Latin American history, and his tale is filled with lessons about leadership and passion. This book reads like a wonderful novel but is researched like a masterwork of history.”
— Walter Isaacson, author of Steve Jobs

“This is a magnificent story. Deeply researched and written with clarity, honesty, and verve, Marie Arana’s book tells the life of one of the greatest heroes and founders in world history. North Americans who know only of George Washington will thrill to read the epic adventures of his South American counterpart. As fantastic as Bolivar’s life appears, ‘it is not,’ as Arana says of Latin America’s bloody past in general, ‘magical realism. It is history. It is true.’”
— Gordon S. Wood, author of Empire of Liberty: A History of the Early Republic, 1789–1815, Alva O. Way University Professor and Professor of History Emeritus at Brown University

“With the eye and ear of a novelist, Marie Arana chants the epic of Bolivar with love, zest, and compelling authority.”
— Walter A. McDougall, Pulitzer Prize-winning historian and Alloy-Ansin Professor of International Relations, University of Pennsylvania

“Simon Bolivar has found the perfect biographer in Marie Arana, a literary journalist, brilliant novelist of South America, and wise historian as well. Her portrait of Bolivar is human and moving; she has written a powerful and epic life and times."
— Evan Thomas, author of Ike's Bluff: President Eisenhower's Secret Struggle to Save the World

“Most North American historians have mentioned [Bolivar] only in passing, usually making 'the George Washington of Latin America' reference. . . . That conception obviously needed correction in the form of a comprehensive biography that makes Bolivar’s life accessible to a large readership in the United States. Bolivar is unquestionably that book. . . . Bolivar is magisterial in scope, written with flair and an almost cinematic sense of history happening. . . . A monumental achievement destined to win some major literary prizes.”
— Joseph J. Ellis

"Wonderful. . . . In Arana's energetic and highly readable telling, Bolívar comes alive as having willed himself an epic life. . . . She brings great verve and literary flair to her biography of Bolívar."
— Hector Tobar

"The 'George Washington of South America,' who freed various countries from Spanish colonial rule, emerges in this account as a complex hero. . . . Arana offers a clear-eyed assessment of the ideals, alliances, and human frailtiesthat drove Bolívar’s choices and shaped the Americas."

“Inspired. . . . Arana ably captures the brash brilliance of this revered and vilified leader.”

“Arana is an indefatigable researcher, a perceptive historian, and a luminous writer, as shown in her defining, exhilarating biography of the great South American liberator Simón Bolívar. . . . Her understanding of the man behind the fame—and behind the hostility that enveloped him in his later years—brings this biography to the heights of the art and craft of life-writing.”

“[Arana's] vivid portrait shows us a charismatic man of high ideals, fiery oratory, unflagging energy and resolve, bold strategies, and a romantic aura. . . . Arana’s dramatic narrative is appropriately grand and enthralling . . . and it makes Bolívar an apt embodiment of the ambitions and disappointments of the revolutionary age.”

“This well-rounded work reveals not just an accomplished military tactician but also an able statesman. . . . An important contribution to Bolivarian studies.”

"A fascinating biography of the charismatic military leader who sparked a revolution."
— Abbe Wright

"So who was [Bolivar] that, two centuries after his birth, Chavez would be but the latest to manipulate the flexible power of Bolivarian myth to ideological ends? The answer is complex, and it therefore makes sense that someone with a novelist's grace and a journalist's precision would produce such a satisfying response. Arana . . . manages to both praise Bolivar's achievements and critique his shortcomings, thereby illuminating both the man and the messiah (or demon) that he sometimes became."
— Earl Pike

“Epic is a word used too often to describe lesser work, but Marie Arana’s marvelously readable Bolívar: American Liberator is a biography that earns its adjective. . . . For those who know little of Bolívar’s history — that includes most people in North America — here is a biography that sparks the imagination in its depth and perception, and its unflagging narrative.”
— David Walton

“Thrilling, authoritative and revelatory, here at last is a biography of Bolivar, the maker of South America, that catches the sheer extraordinary unique adventure and titanic scale of his life with accessible narrative and scholarly judgement.”
— Simon Sebag Montefiore