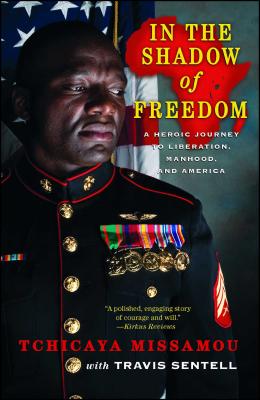 In the Shadow of Freedom (Paperback)

A Heroic Journey to Liberation, Manhood, and America

FROM POVERTY TO WEALTH, FROM AFRICA TO AMERICA, AND FROM CHILD SOLDIER TO U.S. MARINE

Born into the Congolese wilderness, Tchicaya Missamou became a child soldier at age 11. As a horrific civil war loomed across his country, Tchicaya began using his militia connections to ferry jewels, cash, computers, and white diplomats out of the country. By 17, he was rich. By 18, he was a hunted man, his house destroyed, his family brutalized in front of him by his own militia. By 19, he’d left behind everything he’d ever known, escaping to Europe and, eventually, to America.

Incredibly, that was only the start of his journey.

In the Shadow of Freedom is the uplifting story of one man’s quest to achieve the American Dream. Tchicaya Missamou’s life is a shining example of why America is a gift that should not be taken for granted, and why we are limited only by the breadth of our imagination and the strength of our will.

Tchicaya Missamou was born and raised in Brazzaville, Congo. He is pursuing a Ph.D. in education and is the proud owner of The Warrior Fitness Camp, Inc., a high-end personal training facility. He lives in Santa Clarita, California, with his wife, Ana, and three children, Marie Vagansi, Yana Simbasi, and Allan Kelvin Tamsi, "The Legend." Visit www.thewarriorfitness.com.

Travis Sentell was born in New Orleans, Louisiana and currently resides in Los Angeles, California, where he works as a screenwriter, essayist, novelist, actor and playwright.

Praise For In the Shadow of Freedom: A Heroic Journey to Liberation, Manhood, and America…

''A true story as riveting as any thriller, In the Shadow of Freedom kept me on the couch all day Sunday. From his bravery as a child soldier in the Congo, to his courage serving our country, Tchicaya Missamou is the new American hero. You'll never forget his inspiring life.'' -- Judy A. Bernstein, Co-Author of They Poured Fire On Us From the Sky: The True Story of Three Lost Boys of Sudan

"Sgt. Missamou's journey from child soldier in central Africa to United States Marine to American entrepreneur reads like a thriller, but there are powerful lessons in his story. With great love for his family, friends, and his adopted homeland, his life is testimony that what violence destroys, people of courage can rebuild." --Charles London, author of One Day the Soldiers Came

"A compelling story of ordeal and courage. Tchicaya beautifully shares his struggles as a militia during Congo's civil war, his daring escape to Europe and America, and his bravery as a United States marine serving in Iraq." --Joseph Sebarenzi, author of God Sleeps in Rwanda: A Journey of Transformation


"This book reads like an epic poem. Briskly paced, each image and experience sharply crafted, In the Shadow of Freedom relates the story of a heroic journey that is both timeless and contemporary. Tchicaya Missamou should be commended not only for his outstanding service as a U.S. Marine, but for his extraordinary gifts as a masterful storyteller." -- Andrew Carroll, editor of bestsellers War Letters and Behind the Lines

“A polished, engaging story of courage and will.” –Kirkus Reviews

"The patriotic message about America, “my true home,” is hardearned and heartfelt." --Booklist