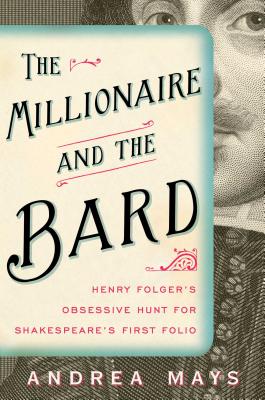 Today it is the most valuable book in the world. Recently one sold for over five million dollars. It is the book that rescued the name of William Shakespeare and half of his plays from oblivion. The Millionaire and the Bard tells the miraculous and romantic story of the making of the First Folio, and of the American industrialist whose thrilling pursuit of the book became a lifelong obsession.

When Shakespeare died in 1616 half of his plays died with him. No one—not even their author—believed that his writings would last, that he was a genius, or that future generations would celebrate him as the greatest author in the history of the English language. By the time of his death his plays were rarely performed, eighteen of them had never been published, and the rest existed only in bastardized forms that did not stay true to his original language.

Seven years later, in 1623, Shakespeare’s business partners, companions, and fellow actors, John Heminges and Henry Condell, gathered copies of the plays and manuscripts, edited and published thirty-six of them. This massive book, the First Folio, was intended as a memorial to their deceased friend. They could not have known that it would become one of the most important books ever published in the English language, nor that it would become a fetish object for collectors.

The Millionaire and the Bard is a literary detective story, the tale of two mysterious men—a brilliant author and his obsessive collector—separated by space and time. It is a tale of two cities—Elizabethan and Jacobean London and Gilded Age New York. It is a chronicle of two worlds—of art and commerce—that unfolded an ocean and three centuries apart. And it is the thrilling tale of the luminous book that saved the name of William Shakespeare “to the last syllable of recorded time.”

“The life of a pathological book collector may sound boring, but rest assured, it isn’t. Mays’ narrative is so fast-moving, and peppered with such fascinating detail, that The Millionaire and the Bard almost reads like a thriller.” —Entertainment Weekly

Andrea E. Mays has degrees in economics from the State University of New York at Binghamton and from UCLA, and teaches economics at California State University at Long Beach. Like Henry Folger, she is a native New Yorker and has had a lifelong Shakespeare obsession. She spent much of her Manhattan girlhood in the New York Public Library listening to vinyl LP recordings of performances by the Royal Shakespeare Company. The Millionaire and the Bard is her first book.