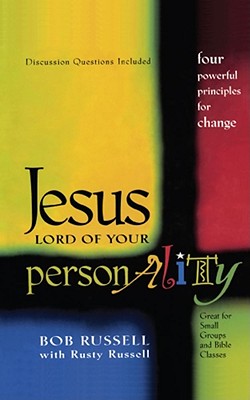 Jesus Lord of Your Personality (Paperback)

God has blessed Bob Russell with a life much different than one he could have ever imagined. As a young man growing up in northern Pennsylvania, Bob had intended on becoming a high school basketball coach in his hometown. During his senior year of high school, however, Bob realized a desire in his heart to enter the ministry. Soon thereafter, he enrolled in Cincinnati Bible Seminary where he graduated in 1965.

At just twenty-two years of age, Bob became the pastor of Southeast Christian Church in Louisville, Kentucky. Today that small congregation of 120 members has become one of the largest churches in America, with 18,000 people attending the four worship services every weekend.

Bob and his wife Judy have been married for forty years. They have two married sons who live in Louisville and are active at Southeast, and six grandchildren with whom they enjoy spending their time.

An accomplished author, Bob has written over one-dozen books. He also has a weekly column in The Lookout, a magazine printed by Standard Publishing. A highly respected speaker, Bob is heard weekly on the Living Word, a nationally syndicated radio program. In his leisure time he enjoys playing golf and is an avid University of Louisville basketball fan.

Bob Russell's gift of humor and insight, along with his unyielding commitment to honesty and integrity, will inspire the hearts of those who listen to consider Biblical truths as they relate to life in contemporary culture.

Rusty Russell is an associate minister at Southeast Christian Church, where his father, Bob Russell, is senior minister. As a member of the preaching staff, Rusty works behind the scenes in sermon preparation, research,and writing. He is a graduate of Cincinnati Bible College and Seminary and is pursuing a master of divinity at the Southern Baptist Theological Seminary. Before coming to the staff of Southeast, Rusty served as a preaching minister, teacher, and Christian school administrator.
or support indie stores by buying on
Copyright © 2020 American Booksellers Association