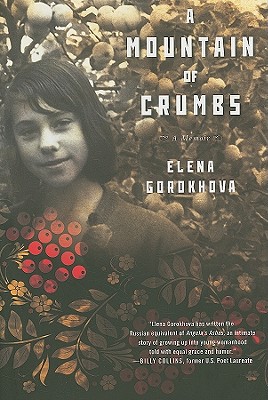 A Mountain of Crumbs

“Elena Gorokhova's A Mountain of Crumbs offers a view of the locked-in nature of daily life in 1960s Leningrad, beginning even in nursery school. Gorokhova's precise language and her word photos are impressive. I loved this book.”
— Carla Cohen, Politics & Prose Books &, Washington, DC
View the List

Elena Gorokhova grows up in 1960's Leningrad, where she discovers that beauty and passion can be found in unexpected places in Soviet Russia.

A Mountain of Crumbs is the moving story of a young Soviet girl's discovery of the hidden truths of adulthood and her country's profound political deception.

Elena, born with a desire to explore the world beyond her borders, finds her passion in the complexity of the English language -- but in the Soviet Union of the 1960s, such a passion verges on the subversive. Elena's home is no longer the majestic Russia of literature or the tsars. Instead, it is a nation humiliated by its first faltering steps after World War II, putting up appearances for the sake of its regime and fighting to retain its pride.

In this deeply affecting memoir, Elena re-creates the world that both oppressed and inspired her. She recounts stories passed down to her about the horrors of the Bolshevik Revolution and probes the daily deprivations and small joys of her family's bunkerlike existence. Through Elena's captivating voice, we learn not only the personal story of Russia in the second half of the twentieth century, but also the story of one rebellious citizen whose love of a foreign language finally transports her to a new world.

Praise For A Mountain of Crumbs: A Memoir…

"What is it about A Mountain of Crumbs that makes it so damn readable? Is it the setting -- the Soviet Union in the second half of the last century on the verge of disintegration? Is it the author's way with the English language? This is a rich experience -- a personal journey paralleled by huge national changes and ending in a deeply satisfying portrait of peace in America. Those who have traveled from another place to America will find themselves in this rich memoir." -- Frank McCourt, Pulitzer Prize-winning author of Angela's Ashes

"An honest, captivating story of a girl from a middle-class Soviet family, growing into a young woman, searching for her identity and unable to find it...In the spirit of Dostoyevsky, it is also an endlessly Russian quest for self-redemption...I advise you to read the book. It will give you pleasure." -- Sergei Khruschchev, son of former Soviet Prime Minister Nikita Khrushchev

"The story of a young person of sparkling intelligence, full of curiosity about the world, struggling to grow and blossom under a duplicitous, censorious, and unremittingly mean-minded social system. Elena Gorokhova conveys all the ugliness of daily life in Soviet Russia, as well as its humiliations, but is awake to its strangled, submerged poetry too. An enthralling read." -- J. M. Coetzee, winner of the 2003 Nobel Prize in Literature and author of Summertime

“[An] exquisitely wrought, tender memoir of growing up in the Soviet Union. . . . A Mountain of Crumbs could be taught as a master class in memoir writing. . . Gorokhova writes about her life with a novelist’s gift for threading motives around the heart of a story . . . Each chapter distills a new revelation in poetic prose . . . This moving memoir made me cry . . . Powerful.”
—Elena Lappin, The New York Times Book Review

“A Mountain of Crumbs vividly, devastatingly conveys what it was like growing up in the shabby disillusion of the Brezhnev-era Soviet Union—and also swooningly indulges the nostalgia for place and landscape that’s seemingly steeped into every Russian soul. . . . Marvelous reminiscence.”
—Ben Dickinson, Elle

"Elena Gorokhova has written an endearing, sensitive story of her early years in the USSR. Her memoir is proof that the human spirit can triumph even in the most repressive of times." -- Edward Hower, author of The New Life Hotel and The Storms of May

"A Mountain of Crumbs is an extraordinary memoir. Elena Gorokhova's writing -- gorgeous and evocative -- is enriched by her connection to two languages, Russian and English. Brilliant and moving." -- Ursula Hegi, author of Stones from the River

"This is a diamond of a memoir. Elena Gorokhova captures the essence of a vanished world with a poet's eye, taking the reader on an unforgettable journey, where every detail transcends the commonplace and every page bears witness to the deepest longings of the human heart. This memoir offers a rare glimpse of life in the former Soviet Union, and also of the universal search for love and autonomy that binds us all together, regardless of time and place." -- Carlos Eire, author of Waiting for Snow in Havana

"Almost painful in its authenticity, this hypnotically readable memoir has the sweep and power of a great Russian novel." -- Bruce Jay Friedman, Academy Award-nominated screenwriter and author of A Father's Kisses and Stern

“A smart, spirited tale about growing up in the colorless Soviet Union of the 1960s.”
—People

“[L]eavened with wistful humor . . . This memoir offers valuable insight into those bleak years bracketed by Khrushchev and Afghanistan . . . [R]endered with sharp detail . . . Gorokhova is attuned to the inherent absurdities of a society that, while aspiring to a supposedly common ideal  . . . cannot care for its citizens on the most rudimentary level.”
—Alexander Nazaryan, Christian Science Monitor

“[A Mountain of Crumbs is] as sweet and earthy as sugar and brown bread. It's a mesmerizing story of an intelligent, adventurous, curious girl and a country with a rich past and lumbering social constraints, both finding the way to a new future.”
—Peggy McMullen, The Oregonian


“[A] witty, illuminating book . . . with telling detail, and a winning balance of affection, insight and satiric bite.”
—Misha Berson, The Seattle Times

“Elena Gorokhova reveals with beautiful writing the panic of growing up inside the secrecy of Brezhnev’s Soviet Union. . . . Even if Elena Gorokhova weren’t such a gorgeous writer, her memoir, “A Mountain of Crumbs,” would be a terrific read. . . . She writes with irony and subtlety about the “bright future” of the Soviet Union, even as she plans her exodus. What makes this book so remarkable, though, is Gorokhova’s evocative and sensuous writing.”
—Laurie Hertzel, The Star-Tribune (Minneapolis-St. Paul)

“A moving memoir about one woman’s journey from the Soviet Union . . . Captivating.”
--The Daily Beast

“Artful memoir about the angst and joys of growing up behind the Iron Curtain. . . . Articulate, touching and hopeful.”
—Kirkus Reviews

“Extraordinarily rich in sensory and emotional detail . . . An engrossing portrait of a very lively, intelligent girl coming of emotional and intellectual age in the post-Stalinist Soviet Union.”
—Bookpage

“Three pages into this beautifully crafted memoir and you know that Gorokhova has always been a writer. . . . the kind that envelops and transports you and every so often leaves you breathless. . . . Recounted in shimmering detail.”

“A dream ride . . . A delight . . . with pitch-perfect lyricism, tremendous power of recall, and disarming wit.”
—Kapka Kassabova, The Guardian (UK)

“A Mountain of Crumbs is . . . a stunning memoir: subtle, yet brimming with depth and detail.”
—Viv Groskop, The Daily Telegraph (UK)

“Brims with an elegiac emotion and sensuality which even Turgenev, in his own European exile, might have envied.”
—Charlotte Hobson, The Spectator (UK)

“Remarkable . . . beautiful and evocative and worth your attention.”
—Nathan Thornburgh, DadWagon.com

“Her richly detailed story explores the reality of her politically subversive passions for language and freedom in a fearful, failing society that distrusted its citizens and repressed individuality.”
—Saga (UK)

“Gorokhova is a lush and beautiful writer. Her tidy, witty descriptions of characters keep the book moving along at a good clip . . . the rich political milieu of the former Soviet Union sets this book apart. You really do get the feeling of what it smelled, tasted and felt like to grow up in that particular place and time.”
— Ellen Silva, senior editor, NPR’s All Things Considered

“An exquisitely moving memoir detailing Gorokhova’s experiences of growing up behind the Iron Curtain. Her story of oppression and hope is described in distinctive poetical prose.”
—Marie Claire (UK)

“Despite the specificity of the memoir, the themes and characters have universality - a domineering mother, a rebellious child, finding passion and beauty in surprising places. A celebration of the triumph of the human spirit over adversity and oppression.”
—Easy Living (UK)

“Combining Gorokhova’s fantastic eye for an image with her acute sense for the absurd, A Mountain of Crumbs elegantly dramatizes the bewildering chasm between the projected, glittering idealism of the Soviet Union and its drab, quotidian reality.”
—Claire Allfree, Metro (UK)

“In this gently delightful memoir, Elena Gorokhova recounts her coming of age in Russia during 1960s and 1970s . . . There’s a wonderful cozy intimacy to her writing; her use of the present tense keeps it fresh and unburdened . . . I loved reading A Mountain of Crumbs. Gorokhova is a fine writer with a delicate, sensitive touch, whose voice in nonetheless fearless and clarion. I hope there’s a sequel. After coming of age comes surely that other great memoir, coming to America.”

“It takes talent to write a good memoir and Gorokhova has more than most. Fascinating anecdotes show us her mother’s youth, and her own recollections spring to life with an artist’s eye for those details that can conjure a mood or a moment. The privations, oppressions and joys are all described with shining curiosity in this captivating book.”
—Waterstone’s Books Quarterly

Elena Gorokhova grew up in St. Petersburg, Russia, although for most of her life it was known to her as Leningrad. At the age of twenty-four she married an American and came to the United States with only a twenty kilogram suitcase to start a new life. The bestselling author of A Mountain of Crumbs and Russian Tattoo, she has a Doctorate in Language Education and currently lives in New Jersey. Her work has appeared in The New York Times, The Daily Telegraph, on BBC Radio, and in a number of literary magazines.
Loading...
or
Not Currently Available for Direct Purchase