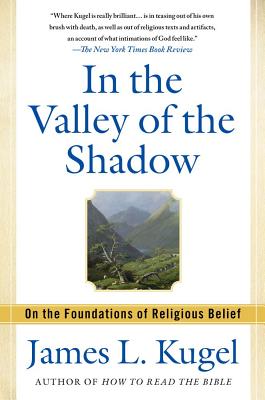 In the Valley of the Shadow (Paperback)

On the Foundations of Religious Belief (and Their Connection to a Certain, Fleeting State of Mind)

Ten years ago, when Harvard professor James Kugel was diagnosed with an aggressive, likely fatal, form of cancer, "I was, of course, disturbed and worried. But the main change in my state of mind was that . . . the background music had suddenly stopped. . . . the music of daily life that's constantly going, the music of infinite time and possibilities. Now suddenly it was gone, replaced by nothing, just silence. There you are, one little person, sitting in the late-summer sun, with only a few things left to do." Despite his illness, Kugel was intrigued by this new state of mind; it seemed to reveal something basic about the religions that he had been studying for years. In this wide-ranging exploration of religion throughout the ages, interspersed with personal reflection on the course of his illness, Kugel mines a rich store of sources in an attempt to understand mankind's unending series of encounters with God, from ancient accounts of human meetings with gods and angels, to first-person narratives of religious conversions and the findings of neuroscientists and evolutionary biologists about religious belief. A rigorously honest, sometimes skeptical, but ultimately deeply moving affirmation of religious faith, In the Valley of the Shadow is a powerful meditation on humanity's place in the world and life's greatest mystery.

Praise For In the Valley of the Shadow: On the Foundations of Religious Belief (and Their Connection to a Certain, Fleeting State of Mind)…

“A powerful hybrid of memoir, scholarship, and speculation…an unflinching look at that greatest of mysteries, our own death.” --Commonweal