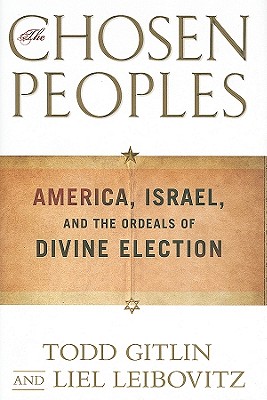 America, Israel, and the Ordeals of Divine Election

Americans and Israelis have often thought that their nations were chosen, in perpetuity, to do God’s work. This belief in divine election is a potent, living force, one that has guided and shaped both peoples and nations throughout their history and continues to do so to this day. Through great adversity and despite serious challenges, Americans and Jews, leaders and followers, have repeatedly faced the world fortified by a sense that their nation has a providential destiny.

As Todd Gitlin and Liel Leibovitz argue in this original and provocative book, what unites the two allies in a “special friendship” is less common strategic interests than this deep-seated and lasting theological belief that they were chosen by God.

The United States and Israel each has understood itself as a nation placed on earth to deliver a singular message of enlightenment to a benighted world. Each has stumbled through history wrestling with this strange concept of chosenness, trying both to grasp the meaning of divine election and to bear the burden it placed them under. It was this idea that provided an indispensable justification when the Americans made a revolution against Britain, went to war with and expelled the Indians, expanded westward, built an overseas empire, and most recently waged war in Iraq. The equivalent idea gave rise to the Jewish people in the first place, sustained them in exodus and exile, and later animated the Zionist movement, inspiring the Israelis to vanquish their enemies and conquer the West Bank and the Gaza Strip. Everywhere you look in American and Israeli history, the idea of chosenness is there.

The Chosen Peoples delivers a bold new take on both nations’ histories. It shows how deeply the idea of chosenness has affected not only their enthusiasts but also their antagonists. It digs deeply beneath the superficialities of headlines, the details of negotiations, the excuses and justifications that keep cropping up for both nations’ successes and failures. It shows how deeply ingrained is the idea of a chosen people in both nations’ histories—and yet how complicated that idea really is. And it offers interpretations of chosenness that both nations dearly need in confronting their present-day quandaries.

Weaving together history, theology, and politics, The Chosen Peoples vividly retells the dramatic story of two nations bound together by a wild and sacred idea, takes unorthodox perspectives on some of our time’s most searing conflicts, and offers an unexpected conclusion: only by taking the idea of chosenness seriously, wrestling with its meaning, and assuming its responsibilities can both nations thrive.


Praise For The Chosen Peoples: America, Israel, and the Ordeals of Divine Election…

“This is one of the finest books I have ever read about the ideas which drive modern nations. Eloquent and erudite, Gitlin and Leibovitz reveal the promise and the pitfalls of a mass temptation neither Americans nor Israelis have been able to resist. The Chosen Peoples is a necessary work for our perilous era.”

--Michael Kazin, author of A Godly Hero: The Life of William Jennings Bryan

“Americans’ deep sense of connection to Old Testament prophecy and providence dates back to the Puritans. In their provocative new book, Todd Gitlin and Liel Leibovitz explore that connection anew for modern times—and offer food for thought and rich argument about the historical as well as political experiences of both Israel and the United States.”

--Sean Wilentz, author of The Rise of American Democracy

“A perceptive comparison between Israel and the United States as Chosen Peoples of God. The authors synthesize history, Bible study, and current events with their own deeply moral analysis. They explore the analogy between the Israeli settlers on Palestinian lands and the white American settlers on Native American lands in ways profoundly enlightening.”

“The Chosen Peoples invites readers to take with great seriousness and respect the idea that both Israel and the United States bear the burden of imagining themselves as chosen by God. In an extraordinarily sensitive exploration of the concept of being chosen, Todd Gitlin and Liel Leibovitz bring a fresh perspective to the history of Israel and America and to the complex linkages between them.”

--Joyce Appleby, professor emerita of history, UCLA, author of The Relentless Revolution: A History of Capitalism

“Few alliances on the world stage are as complex and important as the Israeli-United States special relationship. Yet how best to understand it? In a book that is as refreshing as it is provocative, and timely too, The Chosen Peoples explores the fascinating consequences of both nations seeing themselves as chosen by God. Bravo to Todd Gitlin and Liel Leibovitz for their important contribution.”

--Jay Winik, author of April 1865 and The Great Upheaval

“The Chosen Peoples is a probing account of two powerful myths that have brought us to the brink of disaster, but that may still provide a fresh way forward. The authors’ case for more humane ideas of national destiny is lucid, compelling, and deeply necessary. No one who cares about the future of America--or Israel--can afford to ignore this timely and important book.”

--Jackson Lears, Rutgers University, author of Rebirth of a Nation: The Making of Modern America, 1877-1920

“Intriguing. . . . Brisk and entertaining. . . . A valuable addition to the public discussion of religion and politics (or religion in politics).”

“A thought-provoking book that deserves much attention and debate. . . . In addition to the catholicity of its approach and its truly bold—actually totally chutzpah—scope, I was most attracted to it because it gives a fine framework wherein to situate anti-Semitism and anti-Americanism.”

“Gitlin and Leibovitz shed light on the strong messianic impulses in the history of both ‘chosen’ nations.”

“An ambitious religio-political meditation on American and Israeli history. . . . The theme of chosenness yields an insightful reading of the Israeli national project, which is explicitly linked to ancient religious imperatives.”