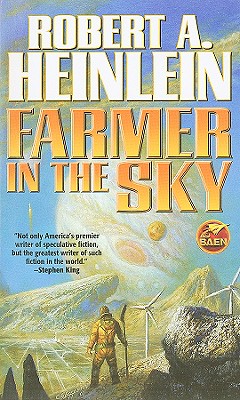 Farmer in the Sky (Mass Market)

1.      Heinlein wrote an amazing string of novels which made the New York Times best seller list and shipped over a million copies each, including Time Enough for Love, The Number of the Beast, Friday, Job: A Comedy of Justice, The Cat Who Walks Through Walls, and To Sail Beyond the Sunset.

3.      Stephen King has called Heinlein “Not only America’s premier writer of speculative fiction, but the greatest writer of such fiction in the world.” And Dean Koontz agrees: “If there is any single author who defines science fiction, it is Robert Heinlein . . . there is no other writer whose work has exhilarated me as often and to such an extent as Heinlein.”

The Earth is crowded and food is rationed, but a colony on Ganymede, one of the moons of Jupiter, offers an escape for teenager Bill Lermer and his family. Back on Earth, the move sounded like a grand adventure, but Bill soon realizes that life on the frontier is dangerous, and in an alien world with no safety nets, nature is cruelly unforgiving of even small mistakes. Bill’s new home is a world of unearthly wonders—and heartbreaking tragedy. He will face hardships, survive dangers, and grow up fast, meeting the challenge of opening up a new world for humanity and finding strengths within himself that he had never suspected existed.

Robert A. Heinlein, four-time winner of the Hugo Award and recipient of three Retro Hugos, received the first Grand Master Nebula Award for lifetime achievement. His worldwide bestsellers have been translated into 22 languages and include Stranger in a Strange Land, Starship Troopers, Time Enough for Love, and The Moon Is a Harsh Mistress. His long-lost first novel, For Us, the Living, was recently published by Scribner and Pocket Books.
or
Not Currently Available for Direct Purchase
Copyright © 2020 American Booksellers Association