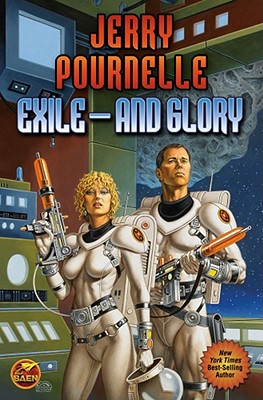 Earth was stagnating from a lack of resources, from corrupt governments that stayed in power by keeping their people in ignorance and poverty, and by the established power structures that stifled the creative technologies that could solve the planet’s problems. But the governments and power structures didn't yet control space, where bold new techniques could freely be applied and the vast resources of the solar system could be utilized by such courageous men and women as:

• Aneas MacKenzie—he had believed in the man he had helped to reach the office of the presidency of the United States, and had tirelessly rooted out corruption wherever he found it, until the trail led straight back to the White House. After that, no place on Earth was safe for him.

• Laurie Jo Hansen—she controlled a multi-national corporation more powerful than many governments. Unlike those governments, she wanted to see Earth’s problems solved and reaching the high frontier was the only way to do that.

• Kevin Senecal—he had made the mistake of fighting back against a juvenile gang, and accidentally killing one of them while escaping. Both the gang and the law were after him, and on all of Earth there was no place to hide.

• Ellen MacMillan—a young employee of the Hansen Corporation who fascinated Kevin, she was on a secret mission, and the biggest secret was her real name.

Two complete novels—High Justice and Exiles to Glory—in one volume by a New York Times best-selling author, telling of an Earth sinking into a morass of corruption, red tape, and failure of nerve, while a dedicated few dare to reach for the stars.

Jerry Pournelle (right), a past winner of the John W. Campbell Award, has collaborated with Niven on numerous bestsellers. He has also written such successful solo novels as Janissaries and Starswarm. He lives in Studio City, California.
Larry Niven and Jerry Pournelle were the joint winners of the 2005 Robert A. Heinlein Award.
Loading...
or
Not Currently Available for Direct Purchase