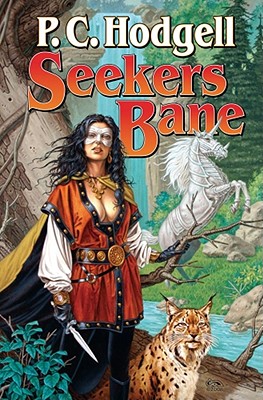 Two epic novels of fantasy adventure in one volume:

Seeker’s Mask: After an epic adventure that will become the stuff of legend, Jame has been reunited with her older brother Torisen and with her people, the Kencyrath. But when she is placed in the Women's Halls and expected to become a normal, quiet Kencyr lady, normal and quiet are not what the Women’s Halls are going to get. Shadow Guild Assassins, ghosts, and other strange beings are soon after her, sprung not only from her own adventurous past but from the tragic, mysterious events that nearly annihilated her family in her father’s time.

To Ride a Rathorn: Jame’s adventures continue as she arrives at the randon military college Tentir to face cut-throat competition and find even more buried, poisonous family secrets. The Kencyr have a phrase, “to ride a rathorn,” referring to a task too dangerous either to accomplish or to give up. This is true for Jame both figuratively, given her military career in a college which no Highborn girl has ever attended before, and literally, in that she is being stalked by one of these murderous, ivory-clad creatures whose mother she killed and who is now after her blood.     All in all, Jame’s school days are shaping up to be anything but golden.

Publisher’s Note: Seeker’s Bane has been previously published as two separate novels, Seeker’s Mask and its sequel To Ride a Rathorn.