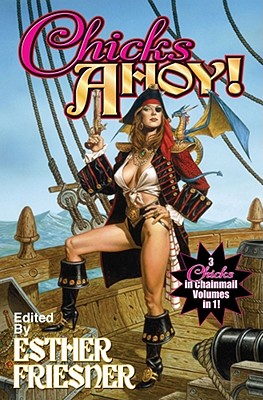 The Popular Chicks in Chainmail Series Set New Standards (and Sales Figures) for Humorous Fantasy. Here're the First Three books in One Specially-Priced Omni-Trade Volume. Here they come, and they're out for blood. For too long, they say, have hot blooded babes in brass bras and chain link bikinis been held up to scorn as the embodiment of male fantasy wish-fulfillment and non-fictionality. You think their swords won't cut, their clubs won't crush? You think they look cute? It's time to take sword-swinging amazons more seriously. Well, maybe not too seriously. After all, the popular Chicks in Chainmail series wasn't known for stark drama and solemn think-pieces. In fact, they made a lot of people laugh. And now the first three books in the series are combined in one attractively-priced Omni-Trade Paperback volume. - Chicks in Chainmail (The look at the lighter side of amazons that started it all.) - Did You Say Chicks? (Smile when you say that, you wimpy noncombatant ) - Chicks 'n Chained Males (Those men just can't take care of themselves, so send in the amazons ) It's all right to have a laugh or two. The swordswomen like a good laugh as much as the next amazon. Just don't let them get the idea that you're laughing at them, instead of with them--if you know what's good for you . . . Stories of fierce female fighters by Harry Turtledove, Roger Zelazny, Elizabeth Moon, Jan and S.M. Stirling, K. D. Wentworth, Lawrence Watt-Evans and more--including Esther Friesner herself.

Esther Friesner is winner twice over of the coveted Nebula Award (for the Year's Best short Story, 1995 and 1996) and is the author of over thirty novels, including the USA Today best-seller Warchild, and more than one hundred short stories. For Baen she edited the five popular "Chicks in Chainmail" anthologies. Her works have been published in the UK, Japan, Germany, Russia, France and Italy. She lives in Connecticut with her husband, two children, and two rambunctious cats.
Loading...
or support indie stores by buying on