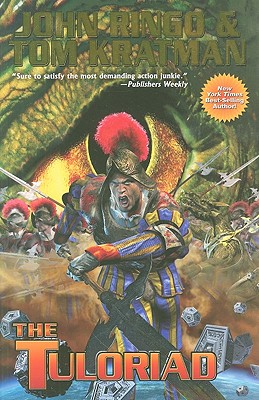 Of the once innumerable battle clans of the Posleen only a handful survive. And that on the sufferance of a group of despised Indowy and Himmit. Plucked from the maelstrom on Earth they are cast out into the eternal blackness of the stars with only a slightly insane Indowy and a computer virus to guide them.

What follows is a trail of tears and remembrance as the Posleen retrace the footsteps of their ancestors in a search for their homeworld. A search to determine if the Posleen posess the one thing no Human would give them credit for: A soul.

Returned to their beginnings, the question remains: Is there a new path for the Tular Posleen?

"As its Homeric-sounding name suggests, the latest Posleen War novel (after 2007's Yellow Eyes) tells of a defeated people fleeing annihilation in search of a new home... They embark upon a search for the origin of their species and discover just how cruelly their people were treated long ago when their ancestors dared to question the godlike Aldenata... Ringo and Kratman turn this space adventure into an intriguing discussion of the power of faith apart from the existence of God." -- Publishers Weekly (Oct.)