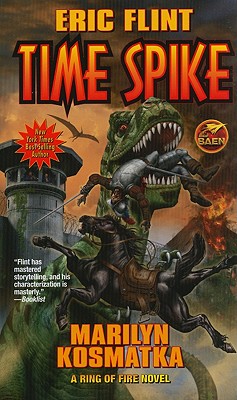 First Time in Paperback for This Time-Travel Adventure by a New York Times Best-Selling Author.

Captain Andrew Blacklock was overseeing the change of shifts at the state of Illinois’ maximum-security prison when the world outside was suddenly ripped. They thought it was an earthquake until they found that the Mississippi river had disappeared, along with all signs of civilization. Then the sun came up—in the wrong direction. And a dinosaur came by and scratched its hide against the wall of the prison . . .

Something had thrown the prison back in time millions of years. And they were not alone. Other humans from periods centuries, even millennia apart had also been dropped into the same time. Including a band of murderous conquistadores. But the prison had its own large population of murderers. They couldn’t be turned loose, but what else could be done with them? Death walked outside the walls, human savagery was planning to break loose inside, and Stephens and the other men and women of the prison’s staff were trapped in the middle.

Eric Flint is the co-author of three New York Times best sellers in his top-selling “Ring of Fire” alternate history series (1634: The Galileo Affair, with Andrew Dennis; 1635: The Baltic War, with David Weber, and 1634: The Bavarian Crisis, with Virginia DeMarce), of which Time Spike is a spinoff novel. His first novel for Baen, Mother of Demons, was picked by Science Fiction Chronicle as a best novel of the year. His 1632, which launched the ring of Fire series, won widespread critical praise, as from Publishers Weekly, which called him “an SF author of particular note, one who can entertain and edify in equal, and major, measure.” A longtime labor union activist with a Master’s Degree in history, he currently resides in northwest Indiana with his wife Lucille.

Marilyn Kosmatka writes fiction. Some believe her stories come from a childhood littered with hookers, drug dealers, murderers, ex-mob members and a lone CIA agent. Others believe the stories come from her experiences as a nurse. She cared for the cast-off babies of drug addicts. She bandaged the elderly, beaten by their own children. Then she went to work on death row. Years have passed since she entered the maximum security prison system with its bars, concertina wire, and midnight executions. But when pressed, she will admit these are years that can haunt the pages of a writer’s stories.
or support indie stores by buying on
Copyright © 2020 American Booksellers Association