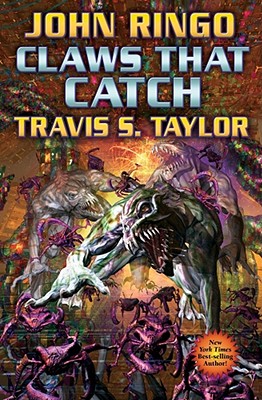 First Time in Paperback.
The Sequel to Into the Looking Glass, Vorpal Blade and Manxome Foe.

Working off of a piece of intelligence from our alien allies, the Vorpal Blade is dispatched to investigate rumors of an ancient and powerful civilization that may have been the creators of the “black box” that drives humanity's only space ship. Any remnant technology would be nice but what the Blade finds is much more than they bargained for. Worse, the ship is infested by an alien species of scorpion-like arachnoids that has the potential to wipe out a world. Worst of all, instead of being Astrogator, Captain William Weaver is now the XO and he is not getting along with the new commander. And the new commander does not get along with Weaver, the ship's female savant-linguist or most of the rest of the original crew. And what is that weird noise the ship makes every time it's in hard maneuvers?

Leave it to the oddball geniuses of the Blade to sort it all out. And the Dreen are not going to like the answers.