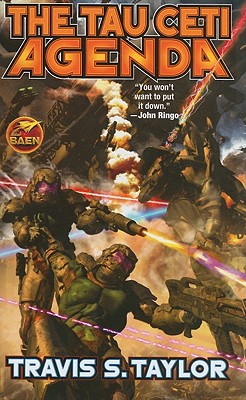 First Time in Paperback for the Exciting Sequel to One Day on Mars. As America Reaches for the Stars, Others Have a More Sinister Goal, and a Lone Operative Must Battle Against an Insidious Conspiracy in This Rapid-Fire Military Science Fiction Thriller.

The riveting edge of your seat sequel to One Day On Mars once again takes us on a blindingly fast pace through events from a futuristic Washington D.C. to the Tau Ceti star system.  Just days before the presidential election a CIA operative uncovers a plot to overthrow America that reaches deep into the government.  To top it off, the forces planning to revolt have somehow developed a technology that allows them to transport across the gulf between the star systems almost instantaneously.

The CIA operative braves hand-to-hand combat and even torture in order to get a warning of the coming coup to American officials while at the same time the two most powerful battleships in the U.S. Space Navy are dispatched to overtake the enemy teleportation technology.  With armored marines, intense space naval battles, fighter plane, and high technology wizardry perhaps the plot to kill the president can be thwarted.  But will that be enough to save the land of the free?

Travis S. Taylor-"Doc" Taylor to his friends-has earned his soubriquet the hard way:  He has a Doctorate in Optical Science and Engineering, a Master's degree in Physics, a  Master's degree in Aerospace Engineering, all from the University of Alabama in Huntsville; a Master's degree in Astronomy, and a Bachelor's degree in Electrical Engineering from Auburn University.  Dr Taylor has worked on various programs for the Department of Defense and NASA for the past sixteen years. He's currently working on several advanced propulsion concepts, very large space telescopes, space-based beamed energy systems, and next generation space launch concepts.  In his copious spare time,

Doc Travis is also a black belt martial artist, a private pilot, a SCUBA diver, has raced mountain bikes, competed in triathlons, and has been the lead singer and rhythm guitarist of several hard rock bands.  He currently lives with his wife Karen and their daughter.
Loading...
or
Not Currently Available for Direct Purchase