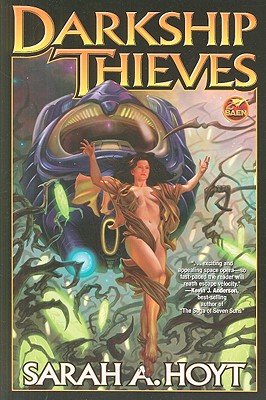 Exciting Space Adventure by a New Star of Science Fiction and Fantasy.


Athena Hera Sinistra never wanted to go to space. Never wanted see the eerie glow of the Powerpods. Never wanted to visit Circum Terra. Never had any interest in finding out the truth about the DarkShips. You always get what you don’t ask for. Which must have been why she woke up in the dark of shipnight, within the greater night of space in her father’s space cruiser, knowing that there was a stranger in her room. In a short time, after taking out the stranger—who turned out to be one of her father’s bodyguards up to no good, she was hurtling away from the ship in a lifeboat to get help. But what she got instead would be the adventure of a lifetime—if she managed to survive. . . .

Sarah A. Hoyt, under various names, is the author of over 30 books—she gets tangled up when she tries to count them and always misses a couple—in science fiction, fantasy, mystery, romance, and historical fiction. Her first published novel, Ill Met by Moonlight, was a finalist for the Mythopoeic Award. Darkship Thieves, the first novel of her popular Darkship Thieves series is a Prometheus Award Winner. She’s published over 100 short stories in magazines such as Analog, Asimov’s, and Weird Tales (and others, some no longer in existence), as well as an array of science fiction, fantasy, and mystery anthologies. Sarah was born and raised in Portugal and now lives in Colorado, near her two grown sons, with her husband and a varying clowder of cats. English is her third language, but she can swear fluently in seven. When not laying down words on the latest manuscript, she can be found refinishing furniture, walking, or studying history.
or
Not Currently Available for Direct Purchase