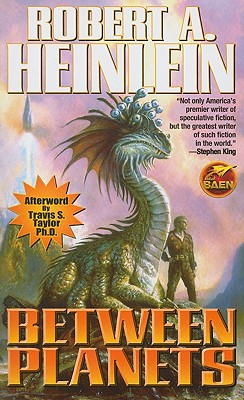 A Sweeping Story of Interplanetary War.

The Grand Master of Science Fiction.

“One of the most influential writers in American literature.” —The New York Times Book Review.

Don Harvey was attending school on Earth when his parents suddenly and urgently called him home to Mars. He had been skeptical about the talk of interplanetary war breaking out if Mars and Venus followed through on their threats to declare independence from Earth, but he was wrong. War broke out, and he was stuck on Venus, with no way of getting home.

Then there was the ring that an old family friend had given him just before he had left Earth. Shortly afterward, the friend had been questioned by Earth’s secret police and had died—from “heart failure,” they claimed. When Earth troops landed on Venus and started looking for Don and that mysterious ring, he realized that he was trapped in the center of a war between worlds that could change the fate of the Solar System forever!

Robert A. Heinlein, four-time winner of the Hugo Award and recipient of three Retro Hugos, received the first Grand Master Nebula Award for lifetime achievement. His worldwide bestsellers have been translated into 22 languages and include Stranger in a Strange Land, Starship Troopers, Time Enough for Love, and The Moon Is a Harsh Mistress. His long-lost first novel, For Us, the Living, was recently published by Scribner and Pocket Books.
or support indie stores by buying on