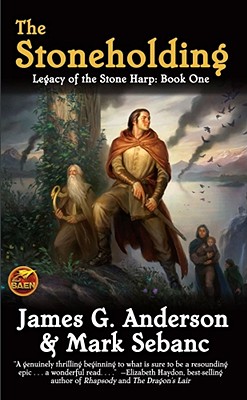 Legacy of the Stone Harp: Book One

As Shadows Loom Over the World of Ahn Norvys, One Song, One Harp, One Man are All That Stand Between the Dark Night of Chaos and the Dawn of Harmony and Order. First Time in Mass Market for This Epic Fantasy in the Tradition of Tolkien. Darkness looms over the ancient world of Ahn Norvys, and the Great Harmony of Ardiel lies rent asunder. Prince Starigan, heir to the throne, has been abducted and power has been usurped by a traitorous cabal. In the mountainous highlands of Arvon is the small but ancient community the Stoneholding, which has held out against the gathering forces of the evil Ferabek. Here by tradition, from earliest times, the High Bard has resided as guardian of the Sacred Fire, as well as the golden harp called the Talamadh. But in his search for the lost prince, Ferabek has attacked the Stoneholding with his Black Scorpion Dragoons and razed it to the ground. Wilum, the aged High Bard was forced to flee for his life with a raaged band of survivors, including Kalaquinn Wright, the wheelwright's son. Kal, green in years and understanding, was torn from his pastoral life in a remote highland clanholding, and thrust out onto a broader stage in a journey of danger and escape, discovery and enlightment. Now, as night covers Ahn Norvys, he must save what remains of the hallowed order of things and seek his destiny, a destiny that lies far beyond the Stoneholding. He must somehow find Prince Starigan and rekindle the Sacred Fire. ..". The Stoneholding is one of those rare discoveries' a world of fantasy that is both as familiar as a folktale, yet still refreshingly new at every turn. It invites comparison to J.R.R. Tolkien, while resonating with its own unique voice demanding pross and a world of great beauty and breadth. A debut not to be missed -James Rollins, best-selling author of Map of Bones

James G. Anderson is a teacher, catechist, musician, and poet, and holds a BA and MA in theology from Franciscan University in Steubenville, OH. His interests range from gardening to fly fishing, from winemaking to songwriting. He lives with his wife and three son on the Canadian prairies outside Saskatoon, Saskatchewan. Mark Sebanc has worked as an editor and translator, with several books to his credit. He holds a B.A. and M.S. degrees in Classics from University of Toronto. When not engaged in wordsmithing, he enjoys playing hockey, splitting firewood and savoring the peace of his backwoods farm on the edge of the Canadian Shield in the Upper Ottawa valley of Ontario.
Loading...
or
Not Currently Available for Direct Purchase