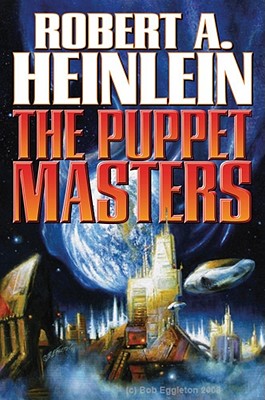 Now in Mass Market. An Epic Battle Against Mind-Controlling Alien Invaders as Only Robert A. Heinlein, the Best-Selling Grand Master of Science Fiction, Could Tell It. “One of the most influential writers in American literature.” —The New York Times Book Review.

Except that two agents of the most secret intelligence agency in the U.S. government were on the scene and disappeared without reporting in. And four more agents who were sent in also disappeared. So the head of the agency and his two top agents went in and managed to get out with their discovery: an invasion is underway by slug-like aliens who can touch a human and completely control his or her mind. What the humans know, they know. What the slugs want, no matter what, the human will do. And most of Iowa is already under their control.
Sam Cavanaugh was one of the agents who discovered the truth. Unfortunately, that was just before he was taken over by one of the aliens and began working for the invaders, with no will of his own. And he has just learned that a high official in the Treasury Department is now under control of the aliens. Since the Treasury Department includes the Secret Service, which safeguards the President of the United States, control of the entire nation is near at hand .

Robert A. Heinlein, four-time winner of the Hugo Award and recipient of three Retro Hugos, received the first Grand Master Nebula Award for lifetime achievement. His worldwide bestsellers have been translated into 22 languages and include Stranger in a Strange Land, Starship Troopers, Time Enough for Love, and The Moon Is a Harsh Mistress. His long-lost first novel, For Us, the Living, was recently published by Scribner and Pocket Books.
Loading...
or support indie stores by buying on
(This book is on backorder)