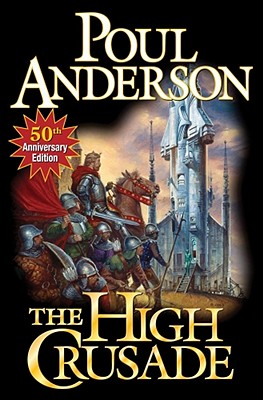 One of the Most Beloved Novels of a Grand Master of Science Fiction, with Introductions and Appreciations by Major Science Fiction Figures. In the year of grace 1345, as Sir Roger Baron de Tourneville is gathering an army to join King Edward III in the war against France, a most astonishing event occurs: a huge silver ship descends through the sky and lands in a pasture beside the little village of Ansby in northeastern Lincolnshire. The Wersgorix, whose scouting ship it is, are quite expert at taking over planets, and having determined from orbit that this one was suitable, they initiate standard world-conquering procedure. Ah, but this time it's no mere primitives the Wersgorix seek to enslave--they've launched their invasion against free Englishmen In the end, only one alien is left alive--and Sir Roger's grand vision is born. He intends for the creature to fly the ship first to France to aid his King, then on to the Holy Land to vanquish the infidel. Unfortunately, he has not allowed for the treachery of the alien pilot, who instead takes the craft to his home planet, where, he thinks, these upstart barbarians will have no choice but to surrender. But that knavish alien little understands the indomitable will and clever resourcefulness of Englishmen, no matter how great the odds against them. . .

Poul Anderson was one of the most prolific and popular writers in science fiction. He won the Hugo Award seven times and the Nebula Award three times, as well as many other awards, notably including the Grand Master Award of the Science Fiction Writers of America for a lifetime of distinguished achievement. With a degree in physics, and a wide knowledge of other fields of science, he was noted for building stories on a solid foundation of real science, as well as for being one of the most skilled creators of fast-paced adventure stories. He was author of over a hundred novels and story collections, and several hundred short stories, as well as several mysteries and nonfiction books. He died in 2001.
Loading...
or support indie stores by buying on
(This book is on backorder)