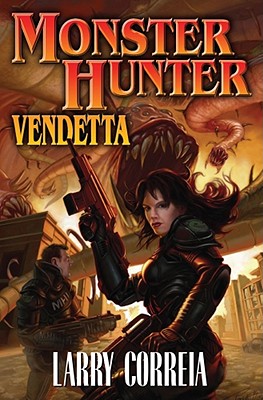 ORIGINAL PAPERBACK.
Sequel to the Hit Novel, Monster Hunter International. Owen Pitt Never Met a Gun He Didn’t Like, or a Monster He Couldn’t Shoot. But Now, the Monsters are Shooting Back . . .

Accountant turned professional monster hunter, Owen Zastava Pitt, managed to stop the nefarious Old One’s invasion plans last year, but as a result made an enemy out of one of the most powerful beings in the universe. Now an evil death cult known as the Church of the Temporary Mortal Condition wants to capture Owen in order to gain the favor of the great Old Ones.

The Condition is led by a fanatical necromancer known as the Shadow Man. The government wants to capture the Shadow Man and has assigned the enigmatic Agent Franks to be Owen’s full time bodyguard, which is a polite way of saying that Owen is monster bait.

With supernatural assassins targeting his family, a spy in their midst, and horrific beasties lurking around every corner, Owen and the staff of Monster Hunter International don’t need to go hunting, because this time the monsters are hunting them. Fortunately, this bait is armed and very dangerous . . .

Larry Correia is the creator of the Wall Street Journal and New York Times best-selling Monster Hunter International series, with first entry Monster Hunter International, as well as urban fantasy hardboiled adventure saga the Grimnoir Chronicles, with first entry Hard Magic, and epic fantasy series The Saga of the Forgotten Warrior, with first entry Son of the Black Sword. He is an avid gun user and advocate who shot on a competitive level for many years. Before becoming a full-time writer, he was a military contract accountant, and a small business accountant and manager. Correia lives in Utah with his wife and family.
Loading...
or support indie stores by buying on