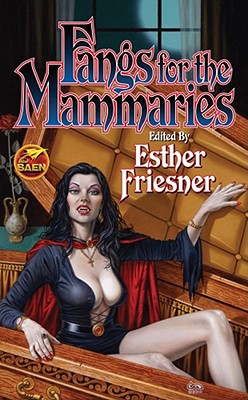 Fangs for the Mammaries

The Follow-Up to Witch Way to the Mall and Strip Mauled from the Creator of the Chicks in Chainmail Series.  Here Come the Vampires to Put the Bite on Suburbia.

Having inflicted the smug homes of suburbia with witches and werewolves. Esther Friesner now unleashes the undead to tap a vein of blood and humor, and drain the suburbs dry of both.

Vampires and the suburbs are a match made in heaven, or maybe Levittown. Remember Dracula? He didn’t run into any real problems until he took his act on the road and traveled to the Big City. But in the suburbs, everyone is polite and respectful of their neighbors’ right to privacy. And if your neighbors happen to have kids selling gift-wrap, magazine subscriptions, cookies, or other school fundraising ploys, and little Emily or Jason happen to come peddling their wares after sundown . . .  Who says you have to stay in the city if you want good take-out meals delivered right to your door? There’s no one quite like a vampire for saying, “All of you kids get off of my lawn!” and putting some teeth  into it.

The stories in these pages—by Sarah A. Hoyt, K.D. Wentworth, Dave Freer and more, including Esther Friesner herself—will convince the reader that vampires and suburbs go together like wine and cheese, gin and tonic, desperation and housewives, marriage and pre-nups. Enter freely and of your own will . . .

Esther Friesner is winner twice over of the coveted Nebula Award (for the Year’s Best short Story, 1995 and 1996) and is the author of over thirty novels, including the USA Today best-seller Warchild, and more than one hundred short stories. For Baen she edited the five popular “Chicks in Chainmail” anthologies. Her works have been published in the UK, Japan, Germany, Russia, France and Italy. She lives in Connecticut with her husband, two children, and two rambunctious cats.
Loading...
or
Not Currently Available for Direct Purchase