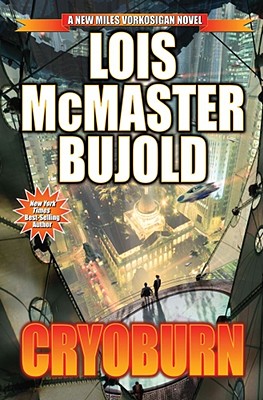 New York Times Best-Selling Author. The Long-Awaited New Installment in the Popular and Award-Winning Vorkosigan Series. Starring the Explosively Charismatic Miles Vorkosigan. Miles Vorkosigan is back Kibou-daini is a planet obsessed with cheating death. Barrayaran Imperial Auditor Miles Vorkosigan can hardly disapprove--he's been cheating death his whole life, on the theory that turnabout is fair play. But when a Kibou-daini cryocorp--an immortal company whose job it is to shepherd its all-too-mortal frozen patrons into an unknown future--attempts to expand its franchise into the Barrayaran Empire, Emperor Gregor dispatches his top troubleshooter Miles to check it out. On Kibou-daini, Miles discovers generational conflict over money and resources is heating up, even as refugees displaced in time skew the meaning of generation past repair. Here he finds a young boy with a passion for pets and a dangerous secret, a Snow White trapped in an icy coffin who burns to re-write her own tale, and a mysterious crone who is the very embodiment of the warning Don't mess with the secretary. Bribery, corruption, conspiracy, kidnapping--something is rotten on Kibou-daini, and it isn't due to power outages in the Cryocombs. And Miles is in the middle--of trouble "Fresh, intriguing, and, as always with Lois McMaster Bujold, superb." --Robert Jordan "It is such a delight to read something by such a good writer, who now seems to be writing at the height of her powers. . . . I really have seldom enjoyed a book so much . . . I couldn't turn the pages fast enough." --Diana Wynne Jones "Living breathing characters who inhabit unusual yet believable worlds." --Jean Auel "Bujold successfully mixes quirky humor with just enough action, a dab of feminist social commentary and her usual superb character development . . . enormously satisfying." --Publishers Weekly "One of sf's outstanding talents . . . an outstanding series." --Booklist "Excellently done . . . Bujold has always excelled at creating forceful characters and she does it here again." --Denver Post ". . . an intelligent, well-crafted and thoroughly satisfying blend of adventure, sociopolitical commentary, scientific experiments, and occasional perils . . . with that extra spicing of romance. . . ." --Locus