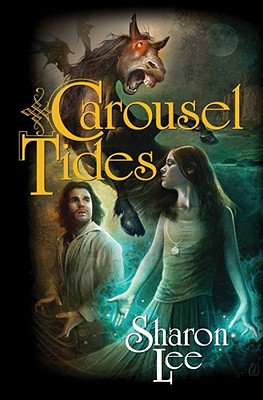 Suspenseful Urban Fantasy by the Co-Author of the Popular Liaden Universe® Series.

“Carousel Tides pulls you into the chill foggy reality of peeling-paint sand-grit coastal Maine outside of tourist season and then hands you something else -- the hidden world lurking in shadows or under the land's surface or just offshore, where Black Dogs hunt the night and selkies toss unpleasant truths over their shoulders before diving into the next wave.  In the center of this, Kate Archer tends and guards one of the spookiest carousels this side of Ray Bradbury and wonders what has happened to her grandmother.  The old woman sent her a letter, left papers deeding over the carousel and old house and the Land (meaning much more than property), and vanished, telling the spirits of the land and sea that she expected to be back before the turning of the year.

“Now March has come and gone and Kate must return from self-exile to take up powers and responsibilities she has renounced, or dying will be the least of her problems . . .

“Sharon Lee weaves fantasy into reality so deftly that you scarcely notice when you slip across the edge.  And once you're there, the story's own magic won't let you turn back from the strong characters, deep mysteries, and even deeper danger.”

“Sharon Lee is one of my all-time favorite authors, a gifted storyteller whose work never fails to enchant.  With Carousel Tides she gives her fans another opportunity to spend time with fascinating characters, bringing them to life in a place that becomes so real you can smell the salt air around you.  Her fine hand with detail never lets the suspense falter, as mystery, folklore, and magic are artfully interwoven into a thoroughly engaging tale.  Carousel Tides will leave you eagerly awaiting the next novel by this master.” —Jan Burke, author of The Messenger, Bones, and Bloodlines

Maine-based writers Sharon Lee and Steve Miller teamed up in the late 1980s to bring the world the story of Kinzel, an inept wizard with a love of cats, a thirst for justice, and a staff of true power. Since then, the husband-and-wife have written dozens of short stories and twenty plus novels, most set in their star-spanning Liaden Universe®. Before settling down to the serene and stable life of a science fiction and fantasy writer, Steve was a traveling poet, a rock-band reviewer, reporter, and editor of a string of community newspapers. Sharon, less adventurous, has been an advertising copywriter, copy editor on night-side news at a small city newspaper, reporter, photographer, and book reviewer. Both credit their newspaper experiences with teaching them the finer points of collaboration. Sharon and Steve passionately believe that reading fiction ought to be fun, and that stories are entertainment. Steve and Sharon maintain a web presence at http://korval.com/
or support indie stores by buying on
Copyright © 2020 American Booksellers Association