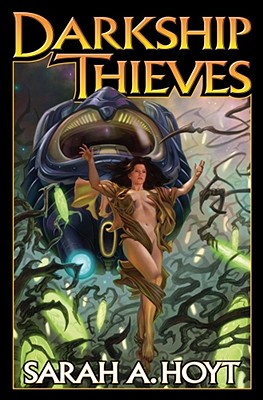 Exciting Space Adventure by a New Star of Science Fiction and Fantasy. First Time in Mass Market Paperback. Athena Hera Sinistra never wanted to go to space. Never wanted see the eerie glow of the Powerpods. Never wanted to visit Circum Terra. Never had any interest in finding out the truth about the DarkShips. You always get what you don't ask for. Which must have been why she woke up in the dark of shipnight, within the greater night of space in her father's space cruiser, knowing that there was a stranger in her room. In a short time, after taking out the stranger--who turned out to be one of her father's bodyguards up to no good, she was hurtling away from the ship in a lifeboat to get help. But what she got instead would be the adventure of a lifetime--if she managed to survive. . . .

Sarah A. Hoyt has sold a dozen novels in various genres, including her new Musketeers Mysteries series, starting with Death of a Musketeer, and her acclaimed Shakespearean fantasy series, which started with the Mythopoeic award finalist, Ill Met by Moonlight. An avid history buff and longtime reader of sci-fi, fantasy, and mysteries Sarah has published over three dozen short stories in esteemed magazines such as Asimov's, Analog, Amazing and Weird Tales, as well as several anthologies. Residing in Colorado with her husband, two teen boys and a pride of cats, Sarah is hard at work on her next dozen novels.
or support indie stores by buying on
(This book is on backorder)