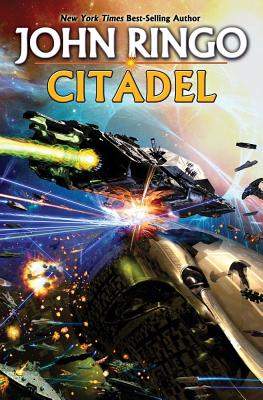 Second in the New Military Science Fiction Series by New York Times Best-Selling Author John Ringo. Once the Earth has been Freed, How Can the Former Conquerors be Kept from Returning to Reconquer the Planet—or Even Destroy It?

Of all the hosts of Eurotas the Troias were the most fell. For they were born of Winter.

Between the Solar Array Pumped Laser and Troy, the two trillion ton nickel-iron battlestation created by eccentric billionaire Tyler Vernon, Earth has managed to recapture the Sol system from their Horvath conquerors and begin entering the galactic millieu.

But when the Rangora Empire rapidly crushes humanity's only ally it becomes clear the war is just beginning. At the heart of nickel iron and starlight are the people, Marines, Navy and civilians, who make Troy a living, breathing, engine of war. Survivors of apocalypse, they know the cost of failure.

If this Troy falls, no one will be left to write the epic.

Citadel continues the saga begun in Live Free or Die, following the paths of several characters during the first years of The Spiral Arm Wars culminating in the First Battle of E Eridani.