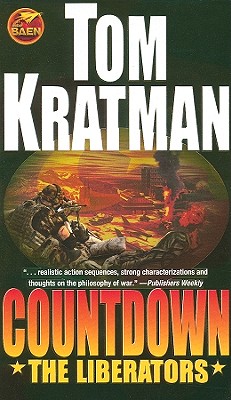 ORIGINAL PAPERBACK! BOOK ONE IN A NEW SERIES!
A New Master of Military Science Fiction Begins a New Series of Military Action Set in the Present Day.

A brand new original paperback series from a military man--and a skilled writer of military adventure.

Old soldiers never die...except inside...when they lack a reason to live. Old soldier Wes Stauer is dying inside, from sheer lack of purpose. And then comes the knock on the door: “Our leader's son and heir has been kidnapped. We don't know where he is. We need you to get him back for us. The people who have him are numerous, warlike, and well armed. But money is no object.”

And then old soldiers—sailors and airmen, too—stop fading away and come back into sharp focus.

“Kratman’s dystopia [in Caliphate] is a brisk page turner full of startling twists . .. he’s a professional military man . . . so he’s certainly up to speed on the military and geopolitical conceits of the book.” —Mark Steyn, Maclean’s Magazine

Tom Kratman, in 1974 at age seventeen, became a political refugee and defector from the PRM (People's Republic of ) by virtue of joining the Regular Army. He stayed a Regular Army infantryman most of his adult life, returning to as an unofficial dissident while attending after his first hitch. Before turning to writing, he practiced law in southwest . In addition to Caliphate, Baen has published the solo novels, A State of Disobedience , A Desert Called Peace and its sequels Carnifex and The Lotus Eaters, and three collaborations with John Ringo in the Posleen War series, Watch on the Rhine, Yellow Eyes and The Tuloriad.
or
Not Currently Available for Direct Purchase
Copyright © 2020 American Booksellers Association