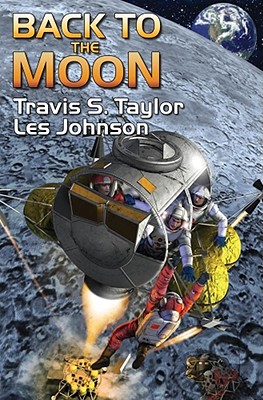 The Saga of the Return to the Moon, This Time to Stay—and the Technological Problems are the Simplest to Solve. Science Fiction by Two Scientists Who Know Both Science and the Ways of Government Bureaucracies.

“I can recommend this book [Living Off the Land in Space: Green Roads to the Cosmos] to everyone interested in the future of space exploration.” —Claude Semay, Physicalia

Les Johnson is a physicist and author. He is the author of The Spacetime War, Mission to Methone; Rescue Mode, coauthored with Ben Bova; Saving Proxima coauthored with Travis S. Taylor; and coeditor of the science/science fiction anthologies Going Interstellar and Stellaris: People of the Stars. He was technical consultant for the movies Europa Report and Lost in Space and has appeared in numerous documentaries on the Discovery and Science channels. Les was also the featured “Interstellar Explorer” in National Geographic Magazine and interviewed for Science Friday. By day, he serves as solar sail principal investigator of NASA’s first interplanetary solar sail missions and leads research on various other advanced space propulsion technologies at the George C. Marshall Space Flight Center in Huntsville, Alabama.
Loading...
or
Not Currently Available for Direct Purchase