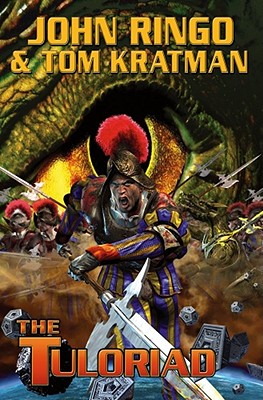 The Direct Sequel to Yellow Eyes.

Of the once innumerable battle clans of the Posleen only a handful survive. And that on the sufferance of a group of despised Indowy and Himmit. Plucked from the maelstrom on Earth they are cast out into the eternal blackness of the stars with only a slightly insane Indowy and a computer virus to guide them.

What follows is a trail of tears and remembrance as the Posleen retrace the footsteps of their ancestors in a search for their homeworld. A search to determine if the Posleen posess the one thing no Human would give them credit for: A soul.

Returned to their beginnings, the question remains: Is there a new path for the Tular Posleen?

John Ringo brings fighting to life. He is the creator of the Posleen Wars series, which has become a New York Times best-selling series with over one million copies in print. The series contains A Hymn Before Battle, Gust Front, When the Devil Dances, Hell’s Faire, andEye of the Storm. In addition, Ringo has penned the Council War series. Adding another dimension to his skills, Ringo created nationally best-selling techno-thriller novels about Mike Harmon (Ghost, Kildar, Choosers of the Slain, Unto the Breach, A Deeper Blue, and, with Ryan Sear, Tiger by the Tail). His techno-thriller The Last Centurion was also a national bestseller. A more playful twist on the future is found in novels of the Looking-Glass series: Into the Looking Glass, Vorpal Blade, Manxome Foe, and Claws That Catch, the last three in collaboration with Travis S. Taylor. His audience was further enhanced with four collaborations with fellow New York Times best-selling author David Weber: March Upcountry, March to the Sea, March to the Stars and We Few. There are an additional seven collaborations from the Posleen series: The Hero, written with Michael Z. Williamson, Watch on the Rhine, Yellow Eyes and The Tuloriad, all written with Tom Kratman, and the New York Times best seller Cally’s War and its sequels Sister Time and Honor of the Clan, all with Julie Cochrane. His science-based zombie apocalypse Black Tide Rising series includes Under a Graveyard Sky, To Sail a Darkling Sea, Islands of Rage and Hope and Strands of Sorrow. A veteran of the 82nd Airborne, Ringo brings first-hand knowledge of military operations to his fiction.
Loading...
or support indie stores by buying on
(This book is on backorder)