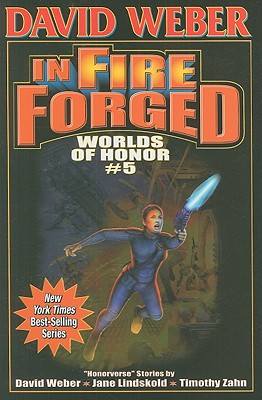 Welcome to the Honorverse. The New York Times Best-Selling Series Continues. 3.8 Million Honor Harrington Books in Print Over 7 Million David Weber Books in Print 18 New York Times Best Sellers from Baen Plus Five More from Tor. Honor Harrington is arguably the most popular character in modern science fiction, but there are many other stories in the Honorverse besides those in which she has the central role. This fifth volume in the popular Worlds of Honor series explores some of those stories with the help of such top writers as best-selling author Jane LIndskjold, New York Times best-selling author Timothy Zahn, and more--including an all-new Honor Harrington adventure, set in her younger years, when a mob of space pirates made the mistake of tangling with Commander Harrington. That was a fatal mistake--for the pirates . . . Praise for the hottest series in military science fiction: "Nobody does space opera better than Weber, and his heroine, Honor Harrington . . . like a fusion of Horatio Hornblower, Robert A. Heinlein and Tom Clancy. . . ." --Publishers Weekly (starred review) " At All Costs is] a fast-paced tale that brings together all the elements developed in previous books, and pushes them a good way along toward an ultimate conclusion. . . ." --Booklist (starred review) "Brilliant Brilliant Brilliant . . . unequivocally superb " --Anne McCaffrey on Weber's Echoes of Honor "Great stuff . . . compelling combat combined with engaging characters for a great space opera adventure." --Locus