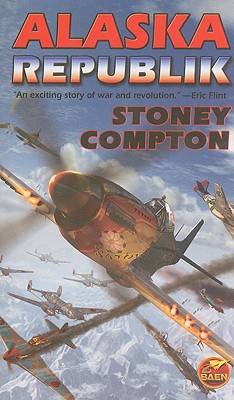 Original Mass Market.
In 1989, Revolution Broke Out in the Czar’s American Possession: Alaska!  The Flame of Liberty has been Ignited—but Powerful Forces Are Determined to Extinguish It.

Alaska, 1989. In a world where Alaska was still a Russian possession, and North America contains nine separate nations, revolution has broken out in Alaska. The Russian yoke has been thrown off for the moment, but the Czar is not going to surrender his valuable possession without a fight. In an exciting alternate history novel filled with military action, Captain Grigorivich Plesnett and his allies must continue his fight to birth a new nation—and fight off an old tyranny, in battles ranging from the Southeastern Inside Passage to the frozen Yukon.

Stoney Compton has had novelettes and short stories published in Universe 1, Tomorrow, and Writers of the Future. He is Senior Graphic Artist for a Bellevue, Washington company, and has worked as a visual information specialist for NOAA, a graphic artist for the Alaska Dept. of Fish & Game, and a staff artist for a weekly newspaper. He was born in Nebraska, lived 31 years in Alaska, and now lives north of Seattle with his wife, Colette, and seven cats.
Loading...
or
Not Currently Available for Direct Purchase