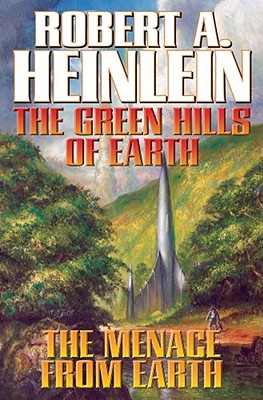 The Green Hills of Earth & The Menace from Earth

First Time in Mass Market for These Two Perennially Top-Selling Heinlein Books in a Single Volume.

“Not only America’s premier writer of speculative fiction, but the greatest writer of such fiction in the world.” —Stephen King

Two of the Grand Master’s finest:

The saga of the opening of the space frontier as courageous men and women risked their lives to build the first space station and colonize the Moon and Venus, while praying for one last landing on the globe that gave them birth, to return to The Green Hills of Earth.

From a mysterious region on Earth, where a more advanced lifeform may be studying the interesting creatures called “humans,” to the first moon colony, where a young girl’s relationship with her boyfriend is endangered by the beautiful Menace from Earth.

Robert A. Heinlein, four-time winner of the Hugo Award and recipient of three Retro Hugos, received the first Grand Master Nebula Award for lifetime achievement. His worldwide bestsellers have been translated into 22 languages and include Stranger in a Strange Land, Starship Troopers, Time Enough for Love, and The Moon Is a Harsh Mistress. His long-lost first novel, For Us, the Living, was recently published by Scribner and Pocket Books.
Loading...
or
Not Currently Available for Direct Purchase