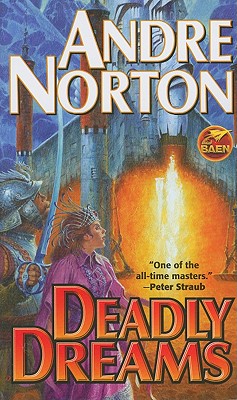 "Grand Dame of Science Fiction" Andre Norton's two Dream novels collected together for the first time. Powerful dreamers become trapped in the perilous, magical worlds of their own creation and must learn to shape their own dreams - or disappear forever. "Grand Dame of Science Fiction" Andre Norton's dream sagas; two novels collected together for the first time in one volume: Perilous Dreams
Tamisen the Dreamer, trained to walk through her dreams to other places, other worlds. But when she is asked by the crippled star traveler Lord Starrex to take him into a dream world where he can regain his legs and his life something goes terribly wrong. Someone, or something, stalks this world, and it does not mean well to Starrex or to Tamisen. Knave of Dreams
For Ramsay Kimble, sleep means nightmares, and he avoids it whenever possible. But now a car accident has catapaulted him into the very world he most dreads: the horror world of his own dreams. But here he is not his ordinary self, but a nobleman from a fair country, possessed of power to fight back, defeat his nightmare visions, change his dream world - and ultimately rescue his life from the terror that stalks him. About Andre Norton: "The Grand Dame of Science Fiction..." -Time "One of the all-time masters." -Peter Straub "Andre Norton is a superb storyteller whose skill draws the reader completely into a fantastic other world..." -Chicago Tribune About Perilous Dreams and Knave of Dreams " A]ll of Norton's renowned story-telling magic is present in abundance . . ." -Future Retrospective "An interesting handling of the parallel worlds theme." -Kliatt

The author of the celebrated Witch World series, Andre Norton has been called "one of the most popular authors of our time" by Publishers Weekly. She is a seminal influence on many of today's top writers including David Weber, Eric Flint, and Peter Straub. Norton received the Grand Master award from the Science Fiction Writers of America and the Lifetime Achievement Award of the World Fantasy Convention. She was astoundingly prolific, with over thirty books in the celebrated Witch World series alone, and introduced three generations of readers to a wide range of science fiction and fantasy classics over a long and prolific career.
Loading...
or
Not Currently Available for Direct Purchase