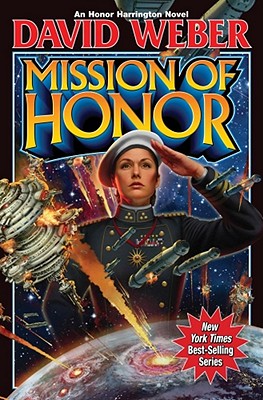 The biggest-selling military science fiction heroine of all time is back in book #12 in the multiple New York Times best-selling series.  Venerated SF military heroine Honor Harrington must pull off the greatest feat of her storied career as she defends her Manticorean Star Kingdom from a devastating and massive surprise attack.

The hottest military science fiction series of all time continues with book #12 in the legendary Honor Harrington saga.

This time, it’s all or nothing for Honor. She imagined she might rest on her laurels.  Settle down.  Spend years with her loved ones.  But the galaxy had other plans.   As the nearly-unstoppable juggernaut of the mighty Solarian League allies with the Star Kingdom’s bitter enemies and closes in, millions die and billions are on the chopping block.  Defeat and slavery to a nasty enemy looms.

But Honor Harington has tasted defeat before and come back to win ultimate victory.  The task is dauting:  she must save her family, preserve the life she has built – and once again rescue the constitutional order of her beloved Star Kingdom. The solution?  To brave utter annihilation in a desperate move to defeat her gathered enemies and win freedom for freedom for her people and the kingdom she has given her life and blood for time and again.

About Mission of Honor:

“Weber combines realistic, engaging characters with intelligent technological projection and a deep understanding of military bureaucracy in the long-awaited 12th Honor Harrington novel…Fans of this venerable space opera will rejoice to see Honor back in action.” –  Publishers Weekly on Mission of Honor

“This latest Honor Harrington novel brings the saga to another crucial turning point…Readers may feel confident that they will be Honored many more times and enjoy it every time.” – Booklist on Mission of Honor

About David Weber and the Honor Harrington series:
“Honor is everything you could want in a heroine….excellent…plenty of action.” – Science Fiction Age