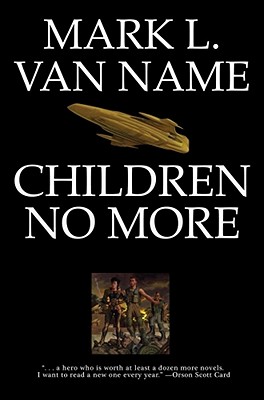 #4 in the popular Jon and Lobo military science fiction series.  A nanotechnology-enhanced space warrior must save an army of innocent children who have been brainwashed to serve as a deadly army for interplanetary military attacks.

Military SF with an adventurous flourish – Mark Van Name notches a thoughtful and hard-hitting #4 entry in his Jon and Lobo saga.

Jon Moore:  nanotech-enhanced, fight-weary soldier-of-fortune.  Assault vehicle Lobo: formerly scrap-heaped A.I.-equipped intelligence and weapons platform (spaceship-sized!) of enormous destructive potential.  Hard lessons have forged their friendship into a powerful alliance. Now Moore confronts his own dark past in the form of a band of child soldiers raised to war. He remembers because he was once one of them.  Now his dilemma: to save the children from their own deadly conditioning.  To do so, he may have to lose the battle – and even put his own life on the line without even Lobo to protect him.

Note: buying this book can help save a child in war.  The author is donating all of his proceeds from the sale of this book to Falling Whistles to help rehabilitate children in war. To learn more, visit fallingwhistles.com or childrennomore.com.

About Mark Van Name:
“Just when I was thinking science fiction might be over, Mark Van Name proves that there are still smart, exciting, emotional sci-fi stories to be told.” –Orson Scott Card on Mark Van Name’s One Jump Ahead.

“He’s going to be the guy to beat in the race to the top of SFdom.”  –John Ringo, best-selling creator of the Posleen War series.

“Many twists and turns…outstanding action.”  –Midwest Book Review on Mark L. Van Name’s One Jump Ahead

Mark L. Van Name is the creator of the popular Jon & Lobo”series of groundbreaking military and adventure SF thrillers and a renown short story writer whose works frequently appear in year’s best anthologies.  He’s a former Executive Vice President for Ziff Davis Media and a national technology columnist.
Loading...
or
Not Currently Available for Direct Purchase