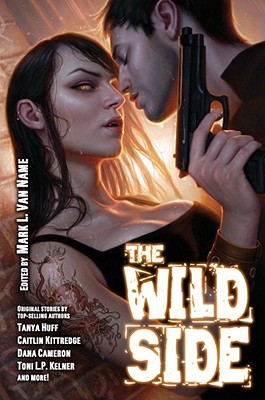 Twilight with actual sex A collection of all original stories filled with A-list contemporary fantasy contributors and featuring heroes, eros and sex on the darker side of town. Seductive tales of contemporary urban fantasy beguile you into a world where lovers are, literally, dying for it Take a walk on the "wild side" of urban fantasy. When the werewolf cubs are asleep and the baby vamps are tucked into their coffins, the adults come out to play Feeling a bit undead and dying to shuffle off your toil and troubles and get it on? You've come to the right place Spend some quality time lolling in the moonlight shadows with a love that only comes out at night. From light-spirited romps to black-hearted noir, from steampunk London to the bleeding edge of the present, tales of love, eros, betrayal and seduction in a beguiling vein. Best-sellers Tanya Huff, Caitlin Kittredge and Toni L.P. Kelner join Dana Cameron, Sarah A. Hoyt, John Lambshead, Diana Rowland and editor Mark L. Van Name create a dazzling cast of vampires, werewolves, witches and zombies, oh my. Oh my.

"Just when I was thinking science fiction might be over, Mark Van Name proves that there are still smart, exciting, emotional sci-fi stories to be told."-Orson Scott Card on Mark Van Name's One Jump Ahead "He's going to be the guy to beat in the race to the top of SFdom." -John Ringo, best-selling creator of the Posleen War series.