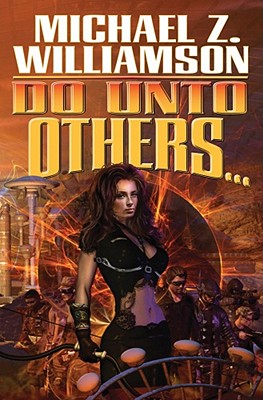 Do Unto Others (Mass Market)

Science fiction high adventure with a compulsive thriller edge.  The inheritor of a family planetary mining dynasty defends her family and the fortune they carved from a wasteland against lawless invaders who would take everything they’ve worked for in a nasty attack.

The Prescott family carved a mining fortune out of uninhabitable waste.  In the process, they became some of the richest people in the known galaxy – and human targets.  Now the next generation of Prescotts fights for its life against powerful and lawless invaders who would steal the fortune that it has taken a family years, blood, sweat and tears to build.

Caron Prescott, the tough-as-nails inheritor of the Prescott dynasty, has the spirit to put up a fight, but until now she has gone untested.  That all changes as Carron is stranded on a lonely mining outpost world.  Now she must prove her mettle as an army of hired goons descends – and, in the process, keep her miners from accidentally blowing the whole planet up when they rally to the Prescott cause!

A 25-year veteran of the US Army and US Air Force, Michael Z. Williamson is a state-ranked competitive shooter in combat rifle and combat pistol. His other books include Freehold, Better to Beg Forgiveness, and Hero – a collaboration with New York Times best-selling author John Ringo. He was born in England, raised in Liverpool and Toronto, Canada, and now resides in Indianapolis with his wife and two children.
or support indie stores by buying on
(This book is on backorder)
Copyright © 2020 American Booksellers Association