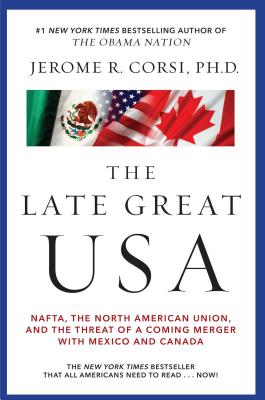 NAFTA, the North American Union, and the Threat of a Coming Merger with Mexico and Canada


Now in paperback, the New York Times bestseller that exposes the business and government leaders who want the United States, Mexico, and Canada to merge into a North American Union similar to the European Union.

The European Union was put into place incrementally over fifty years, not by the citizens of the member states, but by the efforts of an intellectual elite who disguised their ultimate goal of a regional government. Today, a bloated, unelected bureaucracy rules over hundreds of millions of people—people who have no say over the EU’s actions...or their own futures. Think it could never happen here? According to author Jerome Corsi, it already has.

The Security and Prosperity Partnership—announced in 2005 by the leaders of Mexico, the U.S., and Canada, but never presented to Congress for approval—is already laying the groundwork for the merger of the three nations into a North American Union. Here, in The Late Great U.S.A, the #1 New York Times bestselling author of The Obama Nation makes a boldly provocative argument about the future of our country, in this important book that was, in part, the inspiration for the final chapter in Glenn Beck’s #1 New York Times bestseller An Inconvenient Book.

Dr. Jerome Corsi received a Ph.D. from Harvard University in political science in 1972. He is the author of the #1 New York Times bestseller The Obama Nation: Leftist Politics and the Cult of Personality and the co-author of Unfit for Command: Swift Boat Veterans Speak Out Against John Kerry, which was also a #1 New York Times bestseller. He is a regular contributor to WorldNetDaily.com.

Praise For The Late Great USA: NAFTA, the North American Union, and the Threat of a Coming Merger with Mexico and Canada…

"An essential read for anyone concerned about the future independence and sovereignty of the United States." -- Phyllis Schlafly

"If you love your country, read this book." -- Howard Phillips
or
Not Currently Available for Direct Purchase
Copyright © 2020 American Booksellers Association